Sweco Architects was commissioned to modernise the Lugnet Ski Jumps in Falun, Sweden, in preparation for the World Ski Championships in 2015. 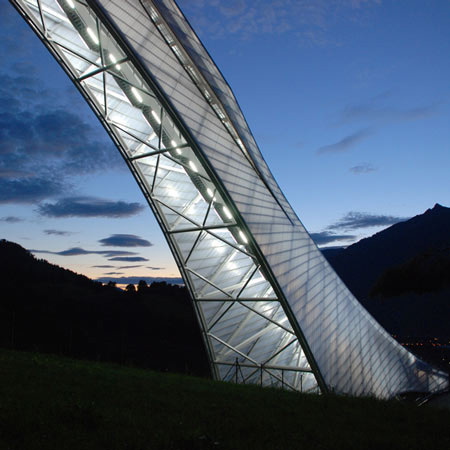 This will be the fourth time the city has hosted the competition, following events in 1954, 1974 and 1993. The two ski jumps – one measuring 52 metres above sea level and the other 303 metres – were constructed for the second event.

Uppsala-based Sweco Architects' Kurt Evan Sonehag, a ski jump expert who was part of the original design team, undertook research to establish the requirements for the modifications.

The studio's intervention involved added new running surfaces and glass and steel balustrades to the sides of the two jumps, replacing outdated materials that were no longer compliant with modern standards. This will allow the jumps to be used all year round.

"The starting point of the project was to keep the characteristic silhouette, which has been a landmark for the city since they were built in the 70s," said project manager Mathias Ahlgren.

Strip lighting runs along the glass and steel railings, emphasising the forms at night and contrasting with the rusty-coloured Corten steelwork of the original structures.

"Lighting design both enhances the towers' shape and provides the necessary lighting for televising the competitions," said the team.

The architects also refurbished a pair of glass observation and waiting spaces under the angle of the bowing jumps – an addition the studio hopes will draw visitors to the site and boost the area's tourism.

"New rooms were designed as modernistic additions in glass and concrete, which contrasts with the darker Corten steel," said the architects, whose previous projects include a hair salon filled with green boxes.

Stairs with industrial non-slip treads lead up the cross-braced towers to the glazed observation decks under the crook of each jump.

Inside, long wooden benches made up of small, slim strips of multi-tonal wood are built into either side of the structures.

Photography is by Tim Meier.