Dezeen and MINI Frontiers: in this movie filmed at Dutch Design Week, Essi Johanna Glomb and Rasa Weber of Berlin studio Blond and Bieber explain how algae can be used to create completely non-toxic textile dyes.

The duo's Algae-based dye is so eco-friendly "you could even eat it," they claim.

"In the textile industry, there are huge issues with chemicals and the poisonous effects of pigments used in the dying processes," says Glomb. "Algae is a totally healthy pigment. You print it and if there's any left over it doesn't harm nature at all."

Blond and Bieber's Algaemy project, which they presented at Dutch Design Week, consists of dyes made from a variety of common species of algae.

"Microalgae are those little cells that you see in every pond," Weber explains. "It's the green stuff." 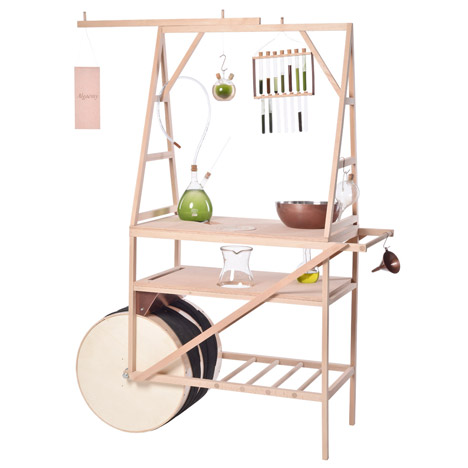 Glomb adds: "Usually it's [considered to be] a weed, which is polluting lakes. We tried to find a different approach to that unwanted material."

"The wide colour palette of algae is quite surprising," Glomb explains. "Algae is usually green, but we also discovered red, brown and yellow tones."

Weber and Glomb grow the algae in glass vessels, blowing into them to provide the necessary carbon dioxide for the cells to photosynthesise and grow. They then extract the pigment to print with.

"You feed them with only exhaling your own breath into the vessel," explains Weber. "[Then] you filter them through this little textile and you make a printing paste out of it."

To demonstrate the dyes, Weber and Glomb created a large analogue textile-printer, which they use to print textiles with a roller.

"We print live at fairs to show that it's actually possible to [use the dyes] in a really simple way," Weber says.

The duo plan to carry on research and development into algae-based dyes, but also want to bring products made using the dyes to market.

"Right now working on small capsule collections," says Weber. "That's something that works really well because its still on a small scale – you can control it, understand the process and then you can grow with it, which is what we want to do as a studio."