Interview: as Nike prepares to reissue Marc Newson's Zvezdochka footwear, the sportswear brand's president and CEO spoke to Dezeen about how the shoes "helped pave the way for other breakthroughs" in manufacturing, aesthetics and sustainability.

"The journey of creating the Zvezdochka has been highly influential with our design and innovation teams, particularly in how products are made," Mark Parker told Dezeen in an email interview set up to celebrate the shoes' tenth anniversary. 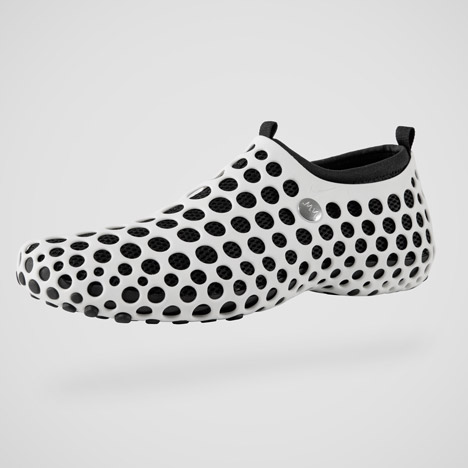 Parker, who was appointed president and CEO of Nike in 2006, said the shoes, which are made of four interchangeable parts and were designed as industrial products rather than fabric garments, helped instigate a shift in the way Nike approaches product development.

"If you take the long view, the Zvezdochka was an important step in what we are now calling [a] manufacturing revolution at Nike," said Parker. "Projects like the Zvezdochka helped pave the way for other breakthroughs like Nike Flyknit, or how we think about new tools like 3D printing."

In an exclusive interview published today, Newson told Dezeen how the injection-moulded shoe was "a really revolutionary idea" in terms of its manufacturing, but Parker said that it has also changed the way Nike thinks about everything from environmental issues to customisation.

"Importantly, it's also influenced how we think about sustainability, one of the world's greatest design opportunities," he said. "It’s become part of the design process to look to remove some of the constraints on our business and minimise our impact on the planet."

"The principles of the Zvezdochka have the power to unlock many exciting opportunities at Nike – from customisation and modularity to sustainability and manufacturing," he added. "Our collective approach sparked a new aesthetic."

Parker, 59, is based at Nike's headquarters at Beaverton in Oregon. He ran competitively for Penn State University before joining Nike in 1979 as a footwear designer.

Parker is also a member of an internal design collaboration team at Nike that forms part of the company's main research and development wing. Called HTM, the team consists of only three members and has no budget restraints or deadlines.

Zvezdochka was originally launched in 2004 as a limited edition in five colours, with a further edition issued in 2010. Nike is now reissuing the shoes in the original five colours through selected NikeLab stores and nike.com/nikelab from 29 December.

Read the full transcript from our interview with Mark Parker:

Marcus Fairs: How did the collaboration with Marc Newson come about?

Mark Parker: I knew Marc before the Zvezdochka project, so I was familiar with his philosophy. Marc's problem-solving approach to design is similar to ours, so working together came very naturally to both of us.

As we began discussing the project, we turned our focus to an unexpected area – the process of traditional shoemaking. That's when we started exploring new territory and saw the potential for this project to be about more than just a new shoe.

Marcus Fairs: Have you worked with any other industrial designers in this way?

Mark Parker: With over 650 [in-house] designers, Nike has a thriving creative culture that is constantly connecting with others. That said, we believe that opening up to outside influences can be extremely powerful and help everyone reach the future, faster.

This approach has teamed us up with a number of creatives from the worlds of art, film, and music over the years. These connections are a deep well of strength for us. There is always an underlying spirit of invention at Nike – we love to create something that has never before existed. And not just new for the sake of new, it has to be better.

So yes, it was energising to work with another designer at the top of his game like Marc. Our collective approach sparked a new aesthetic. But more importantly, it opened the door to possibilities never before imagined.

Marcus Fairs: Tell us about the shoe. What is its inspiration?

Mark Parker: Marc was inspired from his time working at the Russian Space Institute, when he saw photos of cosmonauts jumping on their spaceships' walls for exercise.

We talked about the performance needs they might have: breathability, cushioning, versatility. It led us to a discussion around whole new forms of footwear – we were talking about space, after all – and what it might take to create something entirely different.

Marcus Fairs: You mentioned in a recent interview that Zvezdochka is your favourite Nike collaboration of all. Is that the case? Why do you like this one so much?

Mark Parker: I've always been extremely proud of the Zvezdochka. It looks quite simple, but it's an incredibly finished product.

Often when you enter into a project, you don't know what you've learned until you start the next one. For the Zvezdochka, we knew we had broken new ground: a shoe with four interchangeable parts. It was such a simplified process and led to new exploration in how products are made and the potential for customisation. It's a great example of how a functional innovation helps drive a completely new aesthetic.

Really, the exciting part is that we're still evolving some of the concepts that the Zvezdochka introduced. There's still great potential ahead.

Marcus Fairs: What did Nike learn from the collaboration?

Mark Parker: Sometimes you need to disrupt and create new models to affect meaningful change. We could not make the Zvezdochka with traditional cut-and-sew methods of making footwear.

But we also didn't anticipate the original idea would take us in that direction. Sometimes it's about asking the right questions in the right moment with the right tools in hand.

I like to think there’s always a balance. You don’t always have to start over to create an emotional reaction to your product. It's always powerful to deliver a breakthrough, but there's also a true art to making something great even better. The journey of creating the Zvezdochka has been highly influential with our design and innovation teams, particularly in how products are made.

If you take the long view, the Zvezdochka was an important step in what we are now calling [a] manufacturing revolution at Nike. Projects like the Zvezdochka helped pave the way for other breakthroughs like Nike Flyknit, or how we think about new tools like 3D printing.

Importantly, it's also influenced how we think about sustainability, one of the world's greatest design opportunities. It’s become part of the design process to look to remove some of the constraints on our business and minimise our impact on the planet.

The principles of the Zvezdochka have the power to unlock many exciting opportunities at Nike – from customisation and modularity to sustainability and manufacturing.

Design is an iterative process. One idea often builds on another. Looking ahead, I'm energised thinking of the opportunities provided by customisation and modularity. Of course, in terms of sustainable design, the Zvezdochka's influence will continue to be deeply felt. The shoe removed constraints for a sustainable future. This will always be a goal of ours.

Marcus Fairs: Zvezdochka has a retro-futuristic aesthetic. A lot of sportswear and fashion has been fairly nostalgic in recent years but futurism seems to be creeping in again, with new materials and techniques and the whole wearable tech explosion. Do you agree?

Mark Parker: Nike is at its best when we focus on the future. Sport is in a constant state of progression. Athletes are expanding their potential every day – and so must we.

A big part of this is just how many amazing developments in technology, materials and tools we see every day. Digital technology is giving people a better understanding of themselves, making the sport experience even more personal. We have to look ahead because today's technology won't help tomorrow's athlete. All of these new developments are good for sport and good for Nike.

Marcus Fairs: Tell us about the anniversary edition. Why are you revisiting the shoe ten years on?

Mark Parker: It's a design that feels as contemporary today as it did ten years ago. It's a fascinating product with an even more fascinating story.