CES 2015: German car manufacturer Mercedes-Benz has unveiled its vision for the future of motoring with an autonomous pod-like vehicle designed to function as a communal living room on wheels (+ slideshow).

"Anyone who focuses solely on the technology has not yet grasped how autonomous driving will change our society," explained head of Mercedes-Benz Dieter Zetsche. "The car is growing beyond its role as a mere means of transport and will ultimately become a mobile living space." 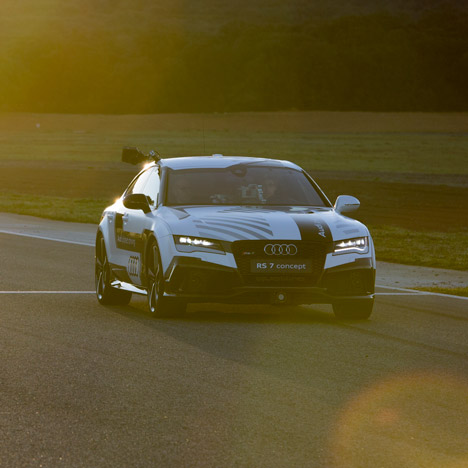 Unveiled today at the Consumer Electronics Show in Las Vegas, the concept design for the F 015 Luxury in Motion features a large interior space, finished in walnut, glass, leather and aluminium, along with four individual lounge chairs that swivel outwards to greet passengers on entry.

Once inside, the chairs swivel round so that the passengers are facing each other. Six screens – controlled with eye-tracking and gesture recognition – are integrated throughout the interior, offering connectivity and entertainment.

"Drivers are relieved of work and stress in situations in which driving is not enjoyable," said head of group research and Mecedes-Benz cars development Thomas Weber. "The time gained while in their car takes on a whole new quality."

Selecting a manual mode would prompt a steering wheel to emerge from the dashboard, while the driver and passenger seats turn automatically to face the direction of travel.

Large LED light modules on the front and back of the car show which mode it's operating in, with white lights indicating manual driving and a blue hue for when it's in autonomous mode.

Created with carbon fibre reinforced plastic, aluminium and steel, its exterior would weigh around 40 per cent less than today's production cars of a similar size.

Despite being lighter, the company said the structure would not be weakened due to the combination of strengthened materials and external beltlines positioned below its windows that would inflate in the case of a side-on collision.

As part of the research conducted for the F 015 Luxury in Motion, Mercedes-Benz also developed a forward-looking scenario called "City of the Future 2030+".

The future of urban infrastructure design – as envisioned by Mercedes-Benz – will consist of special "safety zones", much like today's low-emission zones in city centres, that are only open to autonomous vehicles.

Urban space could also be reclaimed as a result of autonomous vehicles parking themselves outside of a city's central areas.

"In the shared space of the future, humans and machines share the roads," said Mercedes-Benz in a statement. "The 'car-friendly city' is transformed increasingly into the 'people-friendly city' without any loss of individual freedom".

"The divide between residential, recreational and traffic areas therefore melts away."

Other autonomous vehicle designs recently featured on Dezeen include a concept by Global design consultancy IDEO in which workplaces would commute to workers and Tesla's self-parking car that could soon pick you up from anywhere by itself.