CES 2015: the makers of the first popular 3D-printing pen 3Doodler have unveiled a smaller device, which weighs just 50 grams.

The 3Doodler 2.0 by US company WobbleWorks is 75 per cent smaller than the previous version, which raised over $2.3 million on Kickstarter in 2013. 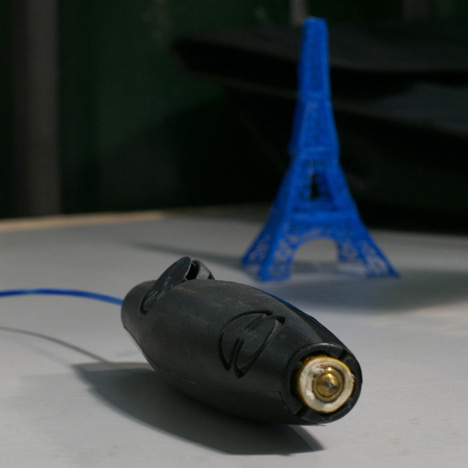 It works in a similar way to a glue gun, melting plastic filament in its body and extruding the liquid from its tip. The plastic cools quickly, aided by a fan built in to the pen, solidifying in the air to create a stable structure.

"Our dream with creating the first generation 3Doodler was to build something that captured the imagination of people worldwide. People Doodled things far beyond our wildest expectations – from RC planes, to 3Doodled dresses, architectural models, and even writing braille," said Daniel Cowen, co-founder of WobbleWorks.

"Now drawing in the air just got even better. As we continue in our pursuit to create the world's first and best 3D printing pen, we're excited to see how our community pushes the boundaries of 3D art and creation."

The 3Doodler 2.0 is housed in an aluminium casing and has a new nozzle design that helps make it more efficient. It can use both PLA and ABS plastic filaments and, like its predecessor, requires no software, allowing users to create three dimensional objects by drawing freehand.

A patented fan system has been added to improve airflow, cooling the plastic faster as it is extruded and reducing noise. It also now has two speed options as well as a temperature setting, offering the user more control over the amount of plastic pushed out of the tip.

The designers also claim the pen is now more "stable" thanks to a reworked heating algorithm.

Four accessories will be released to use with the pen, including a portable power pack, a pedal for controlling the power to the pen, a nozzle set to produce different thicknesses of extruded material and a stand for storing plastic filaments.

WobbleWorks unveiled the design at the CES conference in Las Vegas yesterday, ahead of launching the pen on Kickstarter for a 20 day limited funding round to raise $30,000.

"Although we don't expect to raise millions again, it's our way of thanking the community for the support we were lucky enough to receive the first time around," said WobbleWorks CEO Max Bogue. "We're at a show surrounded by retailers interested in stocking this beautiful version of the pen in their stores, but it's important to us to offer our dedicated community the chance to own the brand new device first."