Architects Panos Dragonas and Varvara Christopoulou believe there is no longer anywhere remote enough to build a wilderness hideaway, so have instead proposed a cabin raised above the Athens rooftops.

As the world becomes increasingly urbanised, and digital mapping extends across deserts and jungles, there can be no more unexplored corners of the globe for a traveller to retreat to, say the Dragonas Christopoulou Architects founders.

This prompted the Greek architects to develop a new structure that allows the contemporary city dweller to escape a taxing daily routine without venturing into the wilderness. 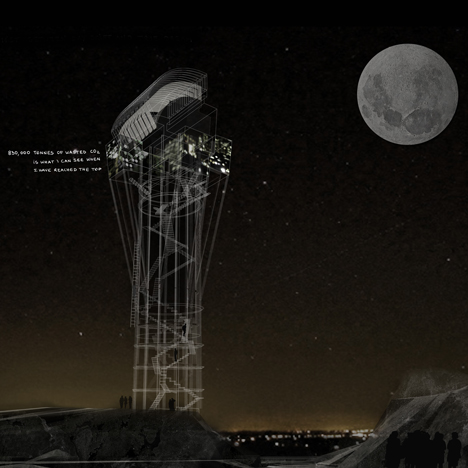 Clio Capeille imagines architecture that can only be used at night

Their proposal, named Detached, comprises a small cabin of just nine square metres. It takes the form of a typical wooden shed, but is also elevated above the city's rooftop landscape on four slender columns.

"During the 21st century, there are no remote locations," explained Dragonas and Christopoulou. "The planet has been explored and digitally mapped in every latitude and longitude. The media and social networks bring the public sphere in every corner of the world."

"The indisputable dominance of the urban condition and the exploitation of the countryside, are shifting the quest for new heterotopic structures in the urban area," they added.

Dragonas and Christopoulou imagine the cabin perched on top of a Greek apartment building known as a polykatoikia. Covering only the basic living needs, the space would contain a raised sleeping area and a stepped floor that frames a desk.

The project, commissioned as part of an exhibition entitled The Minimum Structure, suggests the "artificial landscape" of chimneys, antennas and solar panels can offer an alternative to the idealised rural cabins of architects including Le Corbusier and philosophers such as Martin Heidegger.

"The new structure allows for the minimum detachment from the suffocating environment of the contemporary Greek city. The urban hut creates a voluntary isolation cell over the ruins of the new Great Depression," concluded the architects.