Flux Haus is a parasitic housing scheme, which has been conceptualised by Kammil Carranza, Jitendra Farkade and Vinay Khare, that would engulf five towers in Hong Kong with single-person pods.

The Institute for Advanced Architecture of Catalonia graduates designed the grid structure covered in moving single-occupancy pods to be a "more dignified" alternative to cage homes – tiny dwellings enclosed by a gridded metal walls and large enough for only one bunk bed.

Like other parasitic dwellings, it would be built on another building that would contain support facilities, in this case a housing complex in the Sham Shui Po district in Hong Kong.

In the graduates' vision, each of the pods would be powered by AI and incorporate swarm robotics that promptly adapt and create furniture, allowing anyone to occupy any space.

"This combination of intelligent machines and humans is an adaptive and evolutionary way of living," Farkade told Dezeen.

"As people change, so do their houses. The house understands the inhabitant and provides for their needs. So you won't own a specific pod. You can board any pod and that pod will adapt according to your needs."

Carranza, Farkade and Khare developed Flux Haus as part of the Institute for Advanced Architecture of Catalonia's (IAAC) Future House studio, for which students were asked to use AI and technology to solve the problem of space scarcity. 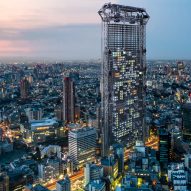 They based the proposal in Sham Shui Po, a district in Hong Kong with a high cost of living that forces locals to settle in substandard dwellings such as cage houses.

Each pod would be suspended from the grid that would engulf the five towers in the Green Harbour Tower complex. This structure is envisaged as a grid of rails constructed by robots that the team imagine will autonomously expand the frame over time.

Flux Haus' cubic living-pods all measure just over six square-metres. Dwellers would access the structure from the existing building entrances, before being transported to an available docking space.

Each pod would have the same basic layout, but incorporate AI and swarm robot technology. Swarm robotics is the coordination of large numbers of simple physical robots to carry out a desired collective behaviour, modelled on the biological studies of insects.

Carranza, Farkade and Khare imagine that these swarm robots will work together to construct the desired room layout and furniture instantly, enabling the cubes to be transformed from a living or dining room to a bedroom instantly.

As part of the proposal the existing building will be adapted to contain all the communal spaces, including bathrooms and kitchens. The pods will then be programmed to take occupants to these spaces when required.

"With an advanced system of swarm robots all the furniture of the pod is constructed and deconstructed almost instantaneously," Farkade told Dezeen.

"This allows users to transform the pod from a bedroom to a living room or whatever by customising to their preferences based on digital assets that they buy." 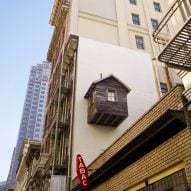 Each pod is complete with artificial ventilation and a sunlight simulator, designed so that the pods do not need windows. Instead, the walls are made up of screens that can be changed to form any desired backdrop.

Collectively, these designs allow occupants to comfortably occupy any space within the Flux Haus, and in turn maximise the number inhabitants that can live there.

Other recent student architecture projects featured on Dezeen include an astronaut training facility on the face of Mont Blanc by the Bartlett's George Bradford-Smith, and RCA graduate June Tong's thermal bath facility that is powered by Arctic cruise ship waste.