Occupying the site of a former milk processing plant next to the existing university, the campus provides a headquarters for the Bocconi School of Management alongside a sports centre.

Instead of filling the 350,000-square-metre site, SANAA broke the programme into a cluster of organic, transluscent white forms that surround a public park cut through by a winding, covered walkway.

Informed by historical Milanese palazzi, each of these buildings has its own courtyard, and integrates landscaped routes, porticos and balconies.

"Every floor has balconies along its perimeter, screened by an undulating metal mesh that creates a porous relationship with the city," said the studio.

"Each volume has an interior courtyard, typical in Milanese architecture, and each is designed to have its own distinct character while being part of a larger system," it continued.

"These are lined with porticos at the ground level offering peaceful environments for socialising, studying and gathering in the open air".

The business school occupies four interconnected buildings in the northeast of the site, with the sports centre to the south and residence hall – of which SANAA only designed the exterior – to the east.

To reduce the exposure and heat-gain of the primarily glass-walled buildings, each is wrapped in a metal screen with diamond-shaped perforations, giving a silvery-white finish during the day and a lantern-like effect at night that visually unifies the campus. 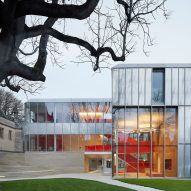 These mesh screens sit slightly raised above the ground level of the buildings, creating a strip of exposed glass at the base of each that visually connects them at the height of the covered walkway across the park.

"We wanted to make the building part of the park," said SANAA principal Kazuyo Sejima.

Facing inwards to the courtyards, these mesh screens have been swapped for alternating bands of glass and opaque-panelled sections, which extend outwards to create sun-shading eaves.

A cylindrical structure called the Pod forms the entrance to the business school's buildings, where the ground floors have been given over to large lobbies and a public cafe, restaurant and book shop lined with an undulating glass wall.

Classrooms and sunken meeting spaces follow the geometry of the buildings, with curving desks and cloud-like arrangements of circular acoustic panels on the ceilings.

The large steel columns that support the concrete slabs of the structure define the edges of these spaces, and have been spaced to avoid disrupting lines of sight across the interiors.

To the south, the three-storey sports centre contains an Olympic-sized swimming pool in its basement and an upper-level sports court, surrounded by a raised balcony for spectators accessed via spiral staircases.

SANAA's new campus is the latest high-profile architectural project for the University of Bocconi, which is already the site of the 2008 School of Economics building by fellow Pritzker Architecture-prize winning studio Grafton Architects.

Photography is by Philippe Ruault unless stated otherwise. The top image is courtesy of SANAA.