Pritzker Architecture Prize-winning studio SANAA has extended the Art Gallery of New South Wales with a series of pavilions that step down towards Sydney Harbour.

Set to open to the public on 3 December, Sydney Modern is designed to contrast with the existing art gallery's 19th-century neo-classical architecture, with the two buildings connected by a public art garden.

SANAA aimed for the extension, which is set in a prominent location on a hillside overlooking Sydney Harbour's Woolloomooloo Bay, to act in harmony with the scenic location.

"We aim to design an art museum building that is harmonious with its surroundings, one that breathes with the city, the park and the harbour," said SANAA principals Kazuyo Sejima and Ryue Nishizawa.

It comprises a cluster of interlocked, rectilinear pavilions grouped around a large, glass-walled atrium at the building's centre that reaches over eleven metres at the highest point and has views across the harbour.

On the lower levels, rammed earth was used to construct the walls using materials sourced from across the Australian state of New South Wales.

Meanwhile, on the upper levels, glass walls were placed to create views across the Royal Botanic Gardens and Sydney Harbour. On top and between the pavilions are a total of 3,400 square metres of courtyards and rooftop terraces, which will be used to host various art installations.

The extension contains a range of large spaces for displaying art, with a gallery dedicated to Aboriginal and Torres Strait Islander art placed on the entrance level.

There are four more galleries, including two that are each over 1,000 square metres with 5.5-metre-high ceilings, located at the lower levels. The building also contains a range of smaller exhibition areas, learning studios for children and school groups and a dedicated studio for creating multimedia works. 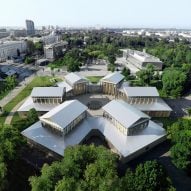 "Our vision has been to transform the Art Gallery into an art museum campus with seamless connections between art, architecture and landscape," said director of Art Gallery of New South Wales Michael Brand.

"Our expansion has such a strong sense of place and such an innovative display of art," he added.

Below the building, a world war two naval fuel bunker has been converted into a 2,200-square-metre space named the Tank.

The unique underground space has seven-metre-high ceilings and will be used for large-scale, site-specific commissions.

Sydney Modern is the first public art museum in Australia to achieve a six-star Green Star design rating. The building is powered entirely by renewable energy, with 10 per cent of the energy created by solar panels on the entrance pavilion roof. Rainwater is captured for reuse in irrigation and cooling towers.

The firm is known for designing various international museum projects including a cloud-like structure for Shenzhen Maritime Museum. Other recent projects by SANAA include a perforated metal-clad campus for Milan's Bocconi University.

The photography is by Iwan Baan unless stated otherwise.