A block appears to have been pushed out from the middle of this concrete tower by Bechter Zaffignani Architekten, which accommodates a control centre for a power station in western Austria (+ slideshow).

Austrian office Bechter Zaffignani Architekten designed the control centre for the Tiwag Power Station in the Tyrollean municipality of Silz. 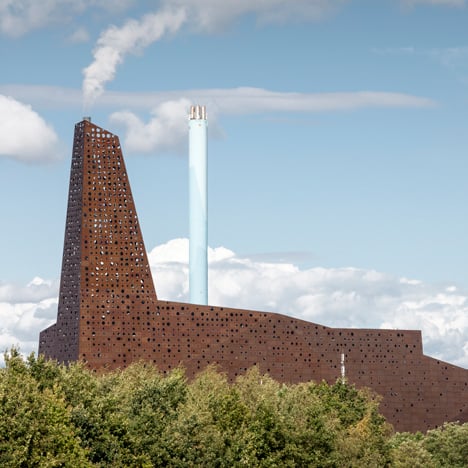 It is one of a trio of structures, including an old turbine building and a new visitor centre, that rise over a grassy knoll at the foot of a densely forested mountain.

A faint grid is visible across the side walls of the eight-storey concrete structure, revealing traces of the construction process. At the front and back, sections of the building project and recede, giving the impression that they have been pushed back and forth.

"The idea behind the control centre is based on stacking the individual functions vertically, with each functional unit organised on a separate floor level," said the architects, who explained that both the proportions and orientation were designed to reference the form of the nearby turbine building.

"This clear hierarchy simplifies the administration of the access and security areas and allows a linear networking of the infrastructure."

The main control room is located in a double-height space that runs across the third and fourth floors of the tower block.

The extra headroom, combined with extensions to the north and south facades, provides the necessary width for the machinery and accounts for the protrusions and recesses in the structure's profile.

Glazing is set into long, narrow slits in these two protruding slabs – which also provide structural support for the building – while the two side walls are windowless to prevent glare in the office spaces.

Iron oxide pigment was added to the concrete to give the exposed surfaces a brown colouring designed to reference the "dynamic components of the generation of power", which include pressure pipe lines, turbines and transformers.

The building sits on a one-metre-thick foundation slab, anchored by tension piles that are equipped to deal with the force of water used to generate power, and the eventuality of an earthquake. A water well provides the energy for both the power station's heat pump and cooling plant.

"Concrete is the ideal material for providing sufficient resistance to the enormous force of water used to generate energy," said the architects. "Like no other material it conveys a sense of security and longevity."

The visitor centre is housed in a slim, elongated building partially submerged into the slope. Full-height glazing faces the road on the northern facade, while clerestory windows on the southern side allow occupants to look out towards the power station.