Northmodern 2015: American designer Shane Schneck has created a silicone lamp for Danish brand Menu that can be used in four different positions.

Diffused light comes from the circular end of the conical Bollard light, designed for Menu by Shane Schneck. 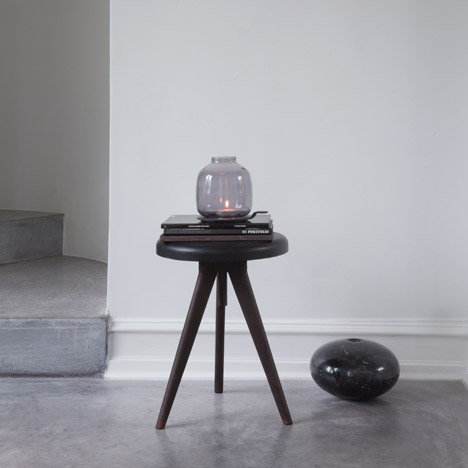 "The form of a lamp is the result of a desire to re-imagine the typical pendant, made possible by adapting LED technology and high-density silicone," said Schneck, whose studio Office for Design is based in Stockholm.

Schneck introduced a small lip around the tip of the cone to form a circular base and a slot that allows the electric cable to switch position.

"With study models we realised adding a 'collar' and clip on the side would add three positions to the typical pendant scenario," Schneck told Dezeen.

The lamp can hang vertically as a pendant or be angled as spotlight when the cable is clipped into the groove, halfway down the shape.

Due to its conical form, Bollard is also able to rest on its side for directional illumination or stood up on its base to point light up at the ceiling.

Wrapped in a silicone skin that is moulded in a single piece, the lamp is available in colours including pale green, ash, nude, black or carbon grey.

"Silicone with a high shore is flexible enough that the entire body can be produced in one piece," said Schneck. "Economy is also a leading factor as the Bollard will be half the cost of traditional pendants."

The lamp was launched at the inaugural Northmodern trade fair in Copenhagen, which took place earlier this month.

Also at the event, Menu released a range of homeware accessories in pale oak and pastel colours intended to "stay classy for generations".