Architecture studio NAAD has gutted a 100-year-old house in Kyoto and re-skinned the interior in plywood to create a temporary dwelling that is designed to look incomplete (+ slideshow).

Sheets of pale plywood were added by NAAD to the walls, floors and ceilings of the timber-framed property, creating a transient home called Ephemeral House for a client in his 20s. 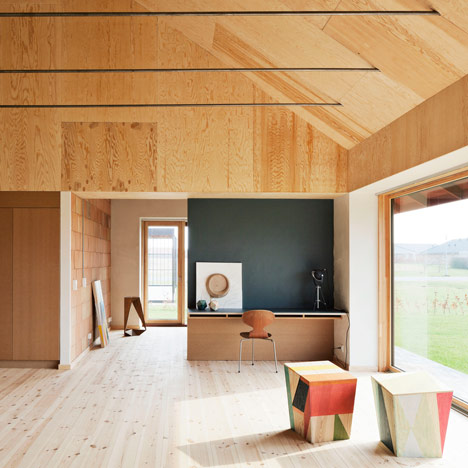 The plywood is left untreated throughout and the space is largely unfurnished, intended to give the appearance of a property that hasn't been finished.

"The surface of the wood constituting the floor, walls and ceiling is coarse and the studs are exposed in the back side of the wall, which gives an impression that the space is under construction or in the process of dismantling," said the architects.

The architects removed existing walls around the stairwell to create a combined living and dining area, but left the rest of the plan largely untouched.

Sliding partitions can be added or removed from metal runners between existing dark wood columns, forming individual rooms around a staircase with solid balustrades that rises up in the centre of the space.

"Our intent in this project is not only to generate an appropriate atmosphere for living, but also to avoid hierarchical dichotomy between past and present," explained the architects, "creating a space that has a rich sense of transience and festivity."

Canvas chairs and metal-framed furniture contribute to the unfinished appearance of the space.

"The space, which at first is perceived as secure and permanent, actually seems to be fragile," they added.

"What emerges is a singular here-and-now space for living."

Photography is by Keishiro Yamada.