News: updated footage of construction work on the Foster + Partners-designed Apple Campus 2 in California has been published on YouTube by another amateur videographer using a drone-mounted GoPro video camera (+ movie).

YouTuber myithz uploaded the video, which shows progress on the site of the technology giant's new offices in Cupertino, California. 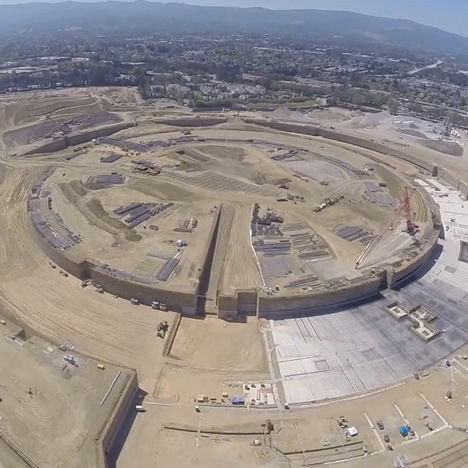 Shot in 4k – a higher pixel density version of HD – the three-and-a-half minute film was produced by mounting a GoPro Hero4 Black on an autonomous flying machine. Myithz chose a Tarot 680Pro Hexacopter drone, which features a folding carbon-fibre frame and can be purchased online for under £70.

An earlier drone movie by YouTuber JCMinn was the first to show images of the site, showing the huge circular foundation trench that dwarfs houses in the surrounding residential district.

Myithz's update, which was filmed at the beginning of this month, shows the first structural components rising out of the ground and the trench now fully lined with a concrete base.

Designed by the firm founded by British architect Norman Foster, the $5 billion Apple Campus is due for completion in 2016, and features a 260,000 square metre, doughnut-shaped building with a design aimed at changing the behaviour of staff in the workplace.

Drones are increasingly providing the public with visual access to construction sites and buildings that they would normally be blocked from visiting.

At the end of 2014, Norman Foster himself narrated a drone tour of his Hearst Tower skyscraper in New York to mark the 10-year anniversary of the building.

"The idea that you are using the most up-to-date technology, something that literally didn't exist 10 years ago, to capture the building now 10 years on – that is, I think, very symbolic," said Foster.

"It's one thing perhaps to come in through the front door, to look and to see the space, but to actually move through it is something I think that one never takes for granted."

"For me this project started in the summer of 2009," said Foster in a movie published by Cupertino City Council. "Out of the blue a telephone call. It's Steve: 'Hi Norman, I need some help.' I was out there three weeks later."

The round building will include one of the world's largest photovoltaic arrays, and 80 per cent of the site will be landscaped green space. Construction began last year and is expected to take 32 months.