Innauer‐Matt Architekten sourced spruce from a nearby woodland for the inside and outside walls of this family house in a hamlet of western Austria (+ slideshow).

Named after its clients, Haus für Julia und Björn is a two-storey house built on a hillside between a lime tree and a walnut tree in Egg, which is in the picturesque Bregenz Forest region. 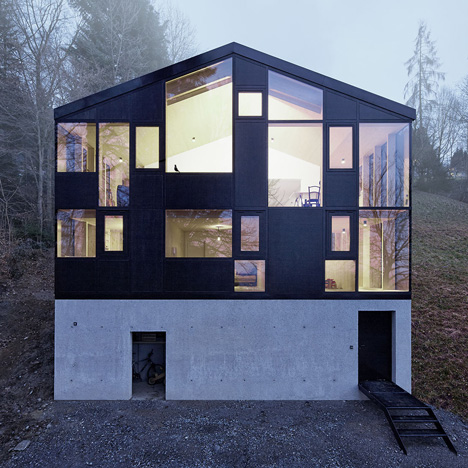 Austrian studio Innauer-Matt Architekten designed a lattice of criss-crossing wooden strips for the building's exterior, while walls and floors inside are covered with panels of spruce.

"The appearance of the house goes beyond what is merely practical," said studio founders Sven Matt and Markus Innauer, explaining how the wooden cladding encases the entire building.

"Although it functions as weather protection, it's more a dress, carefully woven, both concealing and revealing at the same time," the architects said. "However, because the house is built in the countryside, the decoration is intentionally discreet but does not lose anything by the fact that the house is clearly structured, has a steep roof and structural elements such as roof cantilevers."

Thanks to the steepness of the slope, both floors meet the ground. This allowed the architects to locate the main entrance on the upper floor, while the lower level opens out to the surrounding landscape via two sheltered terraces.

The majority of this floor is taken up by a kitchen and dining room with a living space on one side. Closets, shelving and the kitchen are set into a recess that runs along the back of this space, and were also built using the spruce.

"On each floor, an enclosed service zone emphasises the longitudinal alignment of the house," said the architects.

"The walled zone distinguishes the living area from the ancillary rooms," the architects said. "Its spatial depth is visible in niches and relief-like protrusions."

Metal worktops sit flush with the edge of the wood in the kitchen, while the dining area features a generous window ledge that doubles up as a bench.

A partition wall with a built-in fireplace separates the dining space from the living room, and also integrates a square cubbyhole with upholstered seating inside. To contrast with the pale wooden surfaces, this wall features hand-made plaster surfaces, produced on-site from grey marble powder.

Rooms on the upper level are organised in sequence – the master suite is at the far end of the corridor, followed by a pair of single bedrooms, a study, then a utility room leading through to the garage.

The pitch of the roof allowed loft spaces to be created in both of the smaller bedrooms, each with its own staircase.

There's also an intimate room above the study that can be accessed by climbing a ladder.

"Contrary to the spaciousness of the ground floor, the private retreats on the first floor are more densely organised, and a gallery-like extension to the roof makes the small rooms astonishingly generous," added the architects.

Photography is by Adolf Bereuter, Dornbirn.