London fashion studio Sibling used the vibrant hues of furniture and interiors by late Danish designer Verner Panton as a reference for its Autumn Winter 2015 collection, shown as part of London Fashion Week.

Sibling's Call Me collection – named after the 1980 track by rock band Blondie – was presented at Somerset House on Saturday. 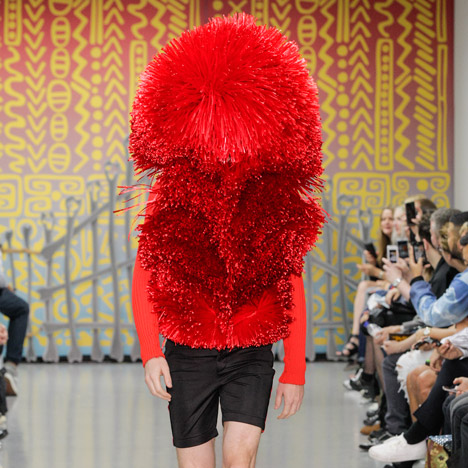 The bright orange, pink and blue colours of the punk-influenced garments came from references in both art and design, including the creator of the 1960 Panton Chair.

"The colour palette is influenced by the work of Francis Bacon and Verner Panton," said a statement from Sibling.

All of the colours were combined into detailed knitted patterns for garments and accessories, including extra-long scarves.

Texture was added by recreating the motifs with thousands of beads and sequins across a pair of dresses.

The collection was designed to complement the studio's Autumn Winter 2015 menswear collection, which featured similar colours, materials and patterns.

Fur trims and the pink, black and white strips shown by men last month were adapted for the female models, who sported backcombed hair and coloured mohawks.

"The buttoned-up style of intricate twinsets and fur trims echoes that of the grand dames of Sloane Street via Gloria TNT," said Sibling.

The collection's title was emblazoned in pink across a black merino wool sweater, worn with a satin skirt in the same colour as the motif.

Bright tones were given an extra sheen with the introduction of Lurex metallic yarns.

Strings, ribbons and flowers were appliquéd onto chequerboard patterns of black material and open squares for a range of tops.

A selection of coats, skirts and dresses were made from black latex, which Sibling said "adds a sex-shop shine to the collection".

"Add in brushed Mongolian lamb, Lurex, and a riot of beads and sequins, and this collection becomes a youthful reimagining of sophisticated lady chic," the designers added.

Sibling collaborated with watch brand Baby-G to create a fair isle-patterned timepiece, also worn by models during the catwalk show.

This season's London Fashion Week, which continues until 24 February, also saw the return of Gareth Pugh to the UK capital's show schedule.

Photography is by Regis Colin.