Collages and sketches of designs by the late architect and Future Systems founder Jan Kaplický have been collected together for an exhibition at the Architectural Association in London (+ slideshow).

Entitled Jan Kaplický Drawings, the exhibition brings together preliminary sketches and collages produced between 1970 and 1999 by the Czech architect. 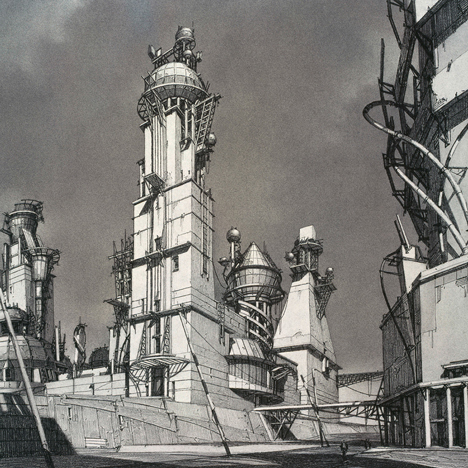 Kaplický, who died in 2009, moved to London in the late 1960s following the Soviet invasion of Czechoslovakia. His best-known built work includes the bulbous Media Centre at Lord's Cricket Ground and the spotty Selfridges store facade in Birmingham.

Hand-drawn sketches and photomontages included in the exhibition depict spacecraft-like structures nestled into lakeside mountains and raised on stilts over metropolises – all real proposals by Kaplický, who struggled to get many of his futuristic designs constructed.

Other projects featured in the exhibition include his competition-winning design for the new Bibliothèque Nationale de France in 1989, which was dropped at the last minute in favour of a design by French architect Dominique Perrault, and his vision for NASA's new International Space Station.

He later directed the studio with his then-partner architect Amanda Levete, producing the Stirling Prize-winning Lord's Media Centre, which is also featured in the exhibition.

A photographic collage shows the bubble-shaped structure hovering above the spectator stands of the historic cricket ground, while sketches detail rows of telescopes within, as well as the complicated structural framework.

The design for House for a Helicopter Pilot features a bright pink cuboid with spindly metal legs and a rooftop helipad, while House for Josef K is a low-rise bulbous structure that almost looks like it has been designed for the surface of Mars.

A book has been published by Circa Press in conjunction with the opening of the exhibition, edited by exhibition curator David Jenkins and featuring an introduction by Rogers.

"Jan was not just a visionary architect, he was a draughtsman of genius," wrote Rogers. "His spirited drawings were at the same time intricate and incredibly economical, able to communicate his Space-Age visions with just a few strokes of the pen."