Herzog & de Meuron has gifted New York's Museum of Modern Art a selection of its models, drawings and other materials that document 24 years of projects by the Pritzker Prize-winning Swiss architecture firm.

The donation features materials relating to nine built and unbuilt projects developed by the firm between 1994 and 2018. These include the 1998 Dominus Winery in Napa Valley, California, the 2010 1111 Lincoln Road car park in Miami to the 2016 Elbphilharmonie Hamburg concert hall, demonstrating the wide scope of projects undertaken by the studio.

Gifted to the museum's collection by the Jacques Herzog und Pierre de Meuron Kabinett – the charitable organisation established by the Swiss architects in 2015 – materials comprise a mix of 23 physical objects, along with digital sketches, study and models. The donation also features "architectural fragments", selected by Herzog and de Meuron to detail the design process of each project.

MoMA intends to exhibit the new assets once its Diller Scofidio + Renfro-designed renovation completes next year. They will be displayed alongside materials from four older projects by the firm, created between 1988 to 1997, and a 2002 "design object" already in the museum's collection.

"For more than three decades, Herzog & de Meuron's practice has been a singular and defining voice in the discourse of contemporary architecture," said Martino Stierli, MoMA's chief curator of architecture and design, in a statement.

"Thanks to the generosity of the office and the Jacques Herzog und Pierre de Meuron Kabinett, we will be able to include these key works of contemporary architectural production in our changing collection displays when the museum opens its newly expanded galleries in 2019."

Established in Basel in 1978, the Swiss firm has received many major architectural awards, including the Pritzker Prize in 2001 and the Stirling Prize for London's Laban Dance Centre in 2008. 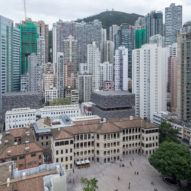 The firm's portfolio includes high-profile cultural, residential and public buildings – many of which feature in MoMA's gift – such as the transformation of an old power station into the CaixaForum art gallery in Madrid, the Jenga-like 56 Leonard skyscraper in New York, and the 226 National Stadium for the 2008 Olympic Games in Beijing.

Among other projects detailed in the set are the Kramlich Residence and Collection in Oakville, Napa Valley – the only home in the donation – and the Eberswalde Technical School Library.

The practice also counts London's Tate Modern and Miami's Pérez Art Museum among its best-known buildings, and has a variety of large-scale projects either recently completed or underway. These include the Tai Kwun art and heritage centre in Hong Kong, and plans for the overhaul of Vancouver Art Gallery – which would be its first project in Canada.

MoMA's renovation to expand its gallery space by 30 per cent resulted in the closure of the architecture and design galleries in 2016, raising questions about whether they would be maintained. MoMA later issued a letter reassuring that they would not be scrapped entirely.

The museum's latest acquisition will build on its recent architectural programme, which has included a major Frank Lloyd Wright retrospective, fantastical models by Congolese sculptor Bodys Isek Kingelez and an exploration of Yugoslavia's concrete architecture. 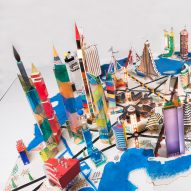