Barzanji began publishing the brightly hued illustrations on his Instagram account in 2016, and has posted more than 100 different designs in this style to date.

One of his best-known pieces, The Last Banquet, depicts a silhouetted man, who gestures across a table towards a woman with bright red hair, wearing a dress in the same colour.

Long, blue-green shadows stretch across the orange-pink floor and walls, evoking a sunset out of frame.

Another illustration features several tall, Escher-esque staircases in saturated shades of blue and pink, which rise from a pool of red paint. At the top of these stairs, populated by houseplants and silhouetted figures, are doorways that open onto a star-studded sky.

"Surrealism helps to connect my ideas and to show a glimpse of my imagination," Barzanji told Dezeen.

The interplay of these signature elements allows the artist to touch on his chosen themes of escapism, utopia and human tragedy.

"I reference life," he explained. "My aim is to focus on small details and issues that are usually overlooked."

Barzanji uses a diary to record his observations of the public's interactions with the built environment – citing train stations, theatres and parks as some of the places he visits to make sketches that form the starting point of his work.

"I'm fascinated by how people live, how they communicate, and the way architecture leads the way we use space," he says.

Barzanji experiments with a range of media but most of his catalogue of work merges manual methods with digital production.

"I sketch the work, then build in the background with watercolours. This is then scanned and edited digitally," he tells of his process. Each piece typically takes two weeks from start to finish.

Barzanji began creating his highly saturated images as a means of therapy, after moving to London as a refugee in 1997 and experiencing a long period of illness during the final year of his physics degree at Loughborough University.

"I'd seen a lot of suffering and needed to let that out. Art was that process," explains Barzanji.

The artist's decision to use architectural features such as stairs, ladders and windows can be traced back to his illness. 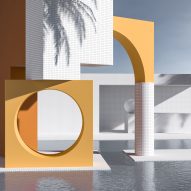 "I had severe migraines, which made me really anxious," he explained. "The doctor told me to imagine doors and windows in your mind that take you to a better place when you feel bad."

As part of his rehabilitation, Barzanji began sharing his art on social media. He has now accrued more than 78,000 followers on Instagram.

He has also worked on commercial and editorial illustration commissions. Last summer, he created a poster in collaboration with Supple Studio for Film4's outdoor screenings in the courtyard at Somerset House.

Barzanji is now represented by Jelly London and is looking to bring his fictional worlds to life with 3D technology. His prints are available to purchase via his website.

Other artists to find an audience through Instagram include Cape Town digital artist Alexis Christodoulou whose imagined spaces in pastel hues have gained him 66,000 followers to date.

Images are by Tishk Barzanji, courtesy of Jelly London.