This eight-storey tower covered in golden louvres and raised up on pilotis accommodates new academic and research facilities for Deakin University in Melbourne (+ slideshow).

The Burwood Highway Frontage Building was designed by architecture firm Woods Bagot to expand the teaching and research facilities for the university's health faculty, as well as accommodating administrative and support areas.

The building takes its name from the adjacent road and its position between two main entrances to the campus, where its visibility demanded a suitably bold statement.

"The architectural intention centred around two key concepts: the spatial composition required by the functional brief, and the client's aspiration to create a gateway building for the campus," said the architects.

The building is formed of two interconnecting blocks – a small silver wing that extends along the boundary facing the highway, and the golden tower raised on slender concrete pilotis, which projects towards the rest of the campus.

The two volumes combine to create an L-shape, with the inner edge of the podium flanked by a pair of north-facing courtyards that add further communal outdoor spaces to the landscaped grounds of the campus.

Both portions of the building are clad in aluminium sun-shading louvres, with the silver finish of the podium and the gold of the tower emphasising the junction between the two separate volumes. 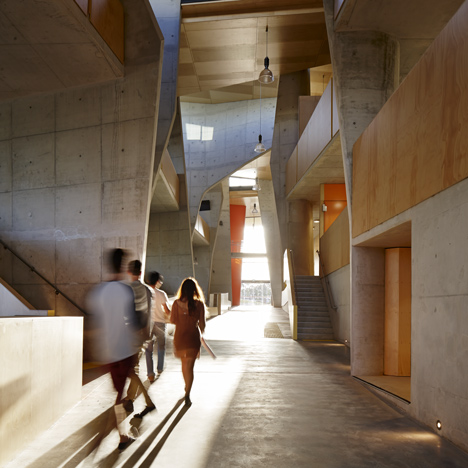 The tower cantilevers above curving concrete walls and ramps that meander around its base, creating a softer visual element alongside the hard-edge metal cladding above.

"Applying a crisper material like aluminium for the louvres provided a strong contrast to the abundance of Brutalist concrete," the architects explained.

"The number of materials used was reduced to create a monumental architectural language."

The angular aesthetic of the building's elevations is continued in the forms of a glass entrance that protrudes onto one of the courtyards, as well as a series of metal-clad free-standing structures dotted around the periphery of the site that contain parts of the building's mechanical plant and services.

Inside, the design for the study areas was based on principles borrowed from modern workplace design. Flexible spaces facilitate both individual study and group work.

Areas for relaxation and socialising are interspersed amongst them, intended to encourage more interaction between staff and students.

The building also accommodates underground car parking, a public art gallery, a library and a cafe.