Interview: hybrid and electric technologies are changing the way cars are designed after decades of stagnation, according to BMW's Benoit Jacob, speaking exclusively to Dezeen about the i8 sports car (+ slideshow).

Nominated for the 2015 Designs of the Year award, the BMW i8 – a plug-in hybrid powered by an electric motor in conjunction with a petrol engine – was conceived as a high-performance sports car that emits fewer emissions than a small city runaround.

Jacob, the designer of BMW's i8, explained to Dezeen that after nearly a century of development cars have evolved into an almost "perfect" form, which has made it more difficult for manufacturers to push the boundaries and create distinct models.

"Cars have made huge steps in terms of quality, appearance, safety and performance," he said. "It's a perfect model, which is very hard to formally evolve."

But recent technological advances and new lightweight materials have presented a different set of design challenges and aesthetic opportunities, which Jacob and the BMW i team explored in the creation of the i8. 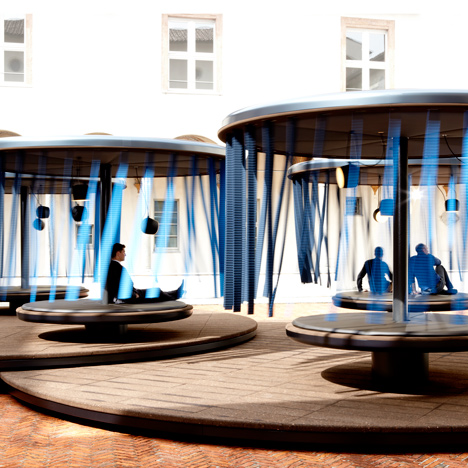 Quiet Motion by Ronan and Erwan Bouroullec for BMW i

"My personal conviction is that there is no good design if there are no good constraints," explained Jacob. "You need some rules."

"What is interesting in the development of a hybrid car is that the constraints have been slightly changed from those of a conventional vehicle," he explained. "The way you build a hybrid is different."

"It drastically alters the proportions, which directly impacts on the design. We saw that as an opportunity to move car design forward."

The result is a low-sitting vehicle incorporating clean, minimalist lines, with a structure of overlapping and interlocking surfaces – emphasised by the car's contrasting colour scheme – and a V-shaped "black belt" that runs from the bonnet, extending over the roof into the vehicle's rear section.

The outer skin is made out of thermoplastic polymers, a material that is half the weight of sheet steel, and the doors open forwards and upwards.

"The i8 tries to express state-of-the-art aerodynamics formally," said Jacob. "We have tried to make what it can achieve visible and understandable."

"The front has to clearly signal that this comes from the house of BMW," he added. "Of course, we were given a bit of freedom to reinterpret these elements, so for the i8 we added a blue hue to the kidney grille to signal its electric capability."

Creating visual cues to the i8's performance was important to Jacob, who knew he had to deliver a special vehicle in order to win over a marketplace sceptical of hybrid cars.

"It was clear from the beginning that the i8 would have to stand out from the crowd as a statement," said Jacob. "When it comes to electric mobility, nobody is ready to give up on the good things we already have. Nobody wants to say the party is over."

Read on for an edited transcript of our interview with Benoit Jacob:

Ross Bryant: Can you introduce yourself and your role at BMW?

Benoit Jacob: I'm Benoit Jacob and I'm responsible for BMW i design as well as the advanced design for BMW Group.

Ross Bryant: In your own words, what is the i8?

Benoit Jacob: The i8 is like the sports car reinvented, the clever sports car or intelligent sports car in the sense that it's a car that achieves quite a lot with very little. What I mean by that is that it has to deliver a lot of emotion and beauty with good performance, but with fewer emissions and less resources. This describes the i8 quite well – to be what could be the sports car of the future.

When it comes to electric mobility, nobody is ready to give up on the good things we already have. Nobody wants to basically say the party is over. So instead, we asked how we could offer a high level of emotion and excitement through a sustainable design.

The i8 could be the sports car of the future

Ross Bryant: How were you able to inject that emotion into a hybrid car?

Benoit Jacob: First, the concept itself. When we ground [the sports car] to the BMW i brand it was kind of untypical to opt for. We could've said "let's leave it up to a city car or a family car" but we wanted to claim a very strong BMW statement by saying, "no, we'll still deliver a car for sheer driving pleasure and reinvent it in a way or define it in a new manner, giving sheer driving pleasure a new interpretation".

We said that a sports car would actually be interesting to pour all our ideas and technical innovations in to, because of course, what describes an i8 is the technology – such as the electric drivetrain – but we also talk about the lightweight technologies such as carbon fibre and highly efficient aerodynamics.

Ross Bryant: Were the aesthetics of the car completely driven by aerodynamics?

Benoit Jacob: Yeah, but yet also in dialogue with the stylist or the designer. Typically when it comes to aerodynamics we know how to create a very aerodynamic shape for a car or an object. A teardrop or a water drop is the optimum shape we need for an aerodynamic vehicle. The only thing is: is this desirable enough, and is this sexy enough? So we came up with alternatives that we could develop and put in the wind tunnel. In a way, the i8 tries to express state-of-the-art aerodynamics formally.

Benoit Jacob: Exactly, because there are even some surfaces we did not have to model ourselves. They were automatically given by nature.

There is no good design if there are no good constraints

Ross Bryant: How is car design changing in response to hybrid and electric systems? What are the aesthetic opportunities for a car designer?

Benoit Jacob: My personal conviction is that there is no good design if there are no good constraints – you need some rules so the design is not always starting from a white piece of paper.

What is interesting in the development of a hybrid car is that the constraints have been slightly changed to those of a conventional car. The way you build a hybrid is different. The technology, such as the electric drivetrain, has a massive impact on the architecture of the car. It drastically alters the proportions, which has a direct impact on the design.

We saw that as an opportunity to move car design forward, or change a little bit because today cars in a sense are a very major product, which are actually quite perfect. After nearly 100 years of development it seems that it's very hard now to make them evolve.

The cars have made huge steps in terms of quality, appearance, safety and performance while still offering that at an affordable price given the amount of technology and complexity involved. So it's a very perfect model, which is very hard to formally evolve. And we see that now with the second generation of cars that tend to repeat a little bit of the previous generation with small formal changes, but the differences are not so significant as they may have been 20 or 30 years ago.

Ross Bryant: So how did you marry design constraints with a new form language for the i8? What opportunities were there for the design?

Benoit Jacob: The opportunities, I would say, are the design freedoms gained through using new materials. For example, we use thermoplastics to create layers to enhance aerodynamics. We also use it for the fenders on the back – it is possible to add them because of the carbon structure and in a way this gives us a design freedom that we didn't really have before, because we can create more complex shapes with more legacies.

We also use thermoplastic in some places to be even more precise in the edges, so from a formal perspective we are freer as designers. Of course we still have to understand the constraints – you have to learn them and put them alongside the process – but at the very end if there's a strong dialogue between engineering and design there's a payback that results in a very different interpretation when it comes to design.

Ross Bryant: There are obviously constraints placed upon designers by nature such as wind resistance. But is brand identity also a constraint? How did you create a car that was still recognisably a BMW?

Benoit Jacob: On one side this [BMW i] is a new brand and it's a new technology. We know customers expected a bit of differentiation. It was clear from the beginning that the i8 would have to stand out from the crowd as a statement. On the other hand, we had to recognise BMW as the mother brand. So the way we did it was quite straightforward. We said OK, the front has to clearly signal that this comes from the house of BMW.

So we repeated the icons such as the kidney grille. Of course, we were given a bit of freedom to reinterpret these elements, so for the i8 we added a blue hue to the kidney grille to signal its electric capability.

Then we started to also bring some elements specific to the BMW i brand such as this very strong contrast between the body elements – the body colour – and black belt, which run across the top of the car.

What we are trying to do with the form language is to be a bit cleaner on some surfacing but with more intensive detailing. If you look on the rear for example, it suggests aerodynamics. The rear diffuser with the very strong contrast between the black panel and the floating layer – where you put the licence plate – suggests the lightness of the car as well as the aerodynamic concept. So in a nutshell we have basically tried to make what the i8 can achieve visible and understandable.