A facade divided into angled segments creates a sharp pattern of light and shadow across the front of this brick apartment building in Kuwait by local architecture firm Studio Toggle.

The Edges Apartments block is situated in the Salmiya district to the south-east of central Kuwait City, and was designed by Studio Toggle to accommodate 20 housing units across its 10 storeys.

The neighbourhood is dominated by modern housing constructed to meet the demand of the growing expatriate community and the unusual facade treatment is a deliberate attempt to distinguish the building from its surroundings.

"Aesthetically, the facade represents a break from the generic curtain-walled apartment blocks that are the norm in the region, choosing to play with the massing and shadows rather than a collage of materials," architect Gijo Paul George told Dezeen.

The facade's irregular form was also influenced by practical considerations including the disruption of strong prevailing winds, and the provision of shade and privacy.

"The angular facade functions as an effective wind breaker," added Paul George, "mitigating the constant strong wind blowing from the sea, as well as affording a certain amount of privacy to each apartment." 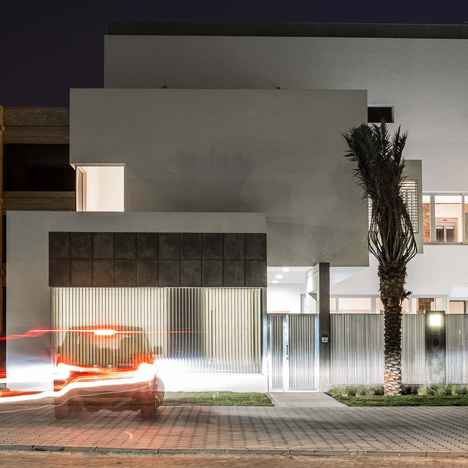 The choice of local brick and exposed concrete is intended to enhance the structure's sense of mass and solidity, while also responding to budgetary constraints and the need to employ simple construction methods.

The materials offer effective thermal insulation from the strong sun and are robust enough to withstand the occasional sand storms that occur in the region. A clear protective coating is applied to the facades to make them even more weather resistant.

Windows set into each of the facade's angled sections are recessed to shade the interior spaces from the sun.

A vertical strip of aluminium louvres splits the building's frontage into two halves, denoting the divide between homes on the north and south sides of the property. The louvres protect the central staircase from direct sunlight, but also restrict views into this glass-lined circulation space.

On the ground floor, an exposed lobby adjacent to the parking area provides access to the staircase, lifts and a communal gym, which faces the street and is partially shielded behind more metal louvres.

The lobby's glass-reinforced concrete ceiling incorporates recessed lighting in an angular channel that directs residents and visitors towards the various entrances and continues the sharp lines of the facade.

"The choice of materials underlines our decision to use hard-wearing, maintenance-free local materials that simultaneously give the massing a raw edge," said Paul George.

A patio to the rear of the building accommodates a small open-air swimming pool.

Photography is by Gijo Paul George.