The What is Luxury? exhibition at London's V&A museum features over 100 "luxury" objects, from a diamond made out of roadkill to furniture and accessories decorated with human hair (+ slideshow).

The exhibition follows Out of the Ordinary and Power of Making as the third in a series organised in collaboration with the UK's Crafts Council.

"What is Luxury? builds on this understanding of craft and uses it as a lens for exploring a wider topic," co-curator Jana Scholze told Dezeen.

The wider topic she refers to encompasses the booming luxury goods market, which grew from $153 billion (£101 billion) in 2009 to $223 billion (£147 billion) in 2014, against a backdrop of increasing social inequality.

It also factors in the interest from academia, as researchers attempt to understand both the desires of consumers in newly wealthy and open countries, and an increasingly intangible definition of luxury that includes the desire for space and time.

"As a public institution, it seemed important to extend the discussions around luxury beyond the currently dominating themes focused solely on consumption, the luxury market, industry and brands," said Scholze, "to encourage thinking about the significance of luxury in our individual lives but also in society in general."

"To some people, luxury may be drinking tea from a cup carefully designed to best highlight the flavour, to others, skimming stones with their children," she added.

A gold-coated skimming stone is one of over 100 objects included in the exhibition, which is arranged around four key themes: Creating Luxury, a Space for Time, a Future for Luxury and What Is Your Luxury? 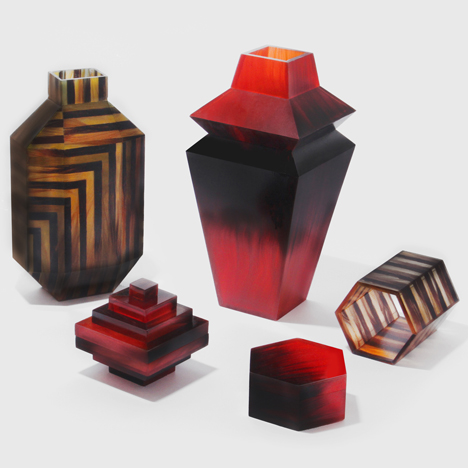 Studio Swine extends collection of products made from hair

In the first section, Philippe Malouin's Time Elapsed – originally designed for crystal company Lobmeyr for Vienna Design Week 2011 – deposits spirographic patterns of quartz sand on the ground beneath it.

"It provides a poetic commentary on fragile ecosystems and the role of technology by combining a modular three-dimensional circuit board structure with LED lights decorated with real dandelion seeds, each picked and applied by hand," said the curator.

Elsewhere in the show, Shane Mecklenburger has synthesised diamonds from unglamorous raw materials such as roadkill and gunpowder, creating a juxtaposition between the inputs and the outcome.

In the final section, a Future for Luxury, Hair Highway by Studio Swine sees human hair set in resin to create furniture and accessories. The decorative surfaces are reminiscent of valuable but limited luxury materials such as tortoiseshell, horn and exotic wood, but made of one of the few natural resources that increases as the world's population does.

"The designers have used human hair and bio resin to craft an incredible, and somewhat eerie, suite of home furnishings, including a large dressing table and combs," said the curator.

"As the title suggests, the exhibition wants to open the debate about ideas, definitions and relationships of luxury in our current conditions," she said.

What is Luxury? – a V&A and Crafts Council exhibition sponsored by Northacre – is open until 27 September 2015.