London studio Loop.pH has created an inflatable plastic dome by London's River Thames that will be pumped full of scented vapour to create a gathering space intended to replicate the atmosphere of a traditional bathhouse (+ slideshow).

Named the Horticultural Spa & Apothecary Experience, the installation consists of an inflatable PVC membrane, ballasted with two tonnes of steel scaffolding. Pot plants are set into the pockets of a latticed birch plywood arch that forms an entrance to the structure.

A slit in the plastic skin allows visitors to slip into the misty interior, where scented vapour produced by adding essential oils and plant extracts to water is pumped into the bubble-like dome.

Imagining a future society where serious water shortages are a reality, the studio replaced full immersion with a light scented water mist. 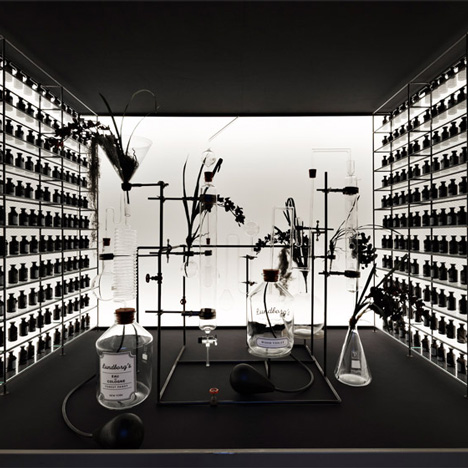 Designers smell opportunities as they explore the "vivid" world of scent

"I am addicted to swimming and swim every morning, which means I now shower and bathe with a group of ladies," Wingfield told Dezeen. "It's become an important social space, as it was in the early days when we didn't all own a bath. I love the idea of creating a new calm social space."

The aromatic mists were developed with medicinal herbalists who advised on the properties of each plant and will be dispersed through a nebuliser fog machine more typically used in agricultural warehouses.

The Daily Fog Menu includes a refreshing grapefruit, lemon balm and peppermint scent that will be dispensed in the early part of the day, a more invigorating bergamot, juniper berry and parsley concoction for mid afternoon, and a soothing bedtime fragrance comprising chamomile, lavender and basil oil in the evenings.

"It's not just about scent, it's the essence of plants, all of which have very different effects on the human body," explained Wingfield.

The studio cites the social aspects of the traditional teahouse and bathhouse, as well as American architect and theorist Buckminster Fuller's investigations into how future societies might deal with water shortages, as influences for the project.

"The idea came in 2008 when working on a project called MetaboliCity, where we brought NASA agricultural technology into housing estates, restaurants and community centres to explore alternative ways of growing food in the city," Wingfield said.

One of the technologies the studio worked with was aeroponics – a soilless method of cultivating plants where the roots are misted with nutrients inside an inflatable membrane.

"At the time I thought if this works for plants then surely it could have benefits for humans," explained Wingfield. "And then my interest in delivering nutrients and even medicines through mist straight into the skin started. I was also researching the work of Buckminster Fuller who proposed that in the future water would be so scarce we would have fog-gun showers."

The installation occupies a spot on the Thames River Path in Nine Elms, a fast-developing area of London by Battersea Power Station. It has been created for London Architecture Festival – a month-long festival of temporary exhibitions, installations and events that takes place across the capital each June – and will be open from 5-7 June.

The Horticultural Spa & Apothecary Experience opens tomorrow with a scent palette curated by Dom Bridges of natural skincare brand Haeckel's. The soundtrack will be provided by sonic artist Mileece, who generates music from the electro-magnetic emissions of plants.

Photography is by Mickey Lee.