Designer Gadi Amit's San Francisco studio New Deal Design has created a device that enables users to stream music from the internet and play it through existing speakers in the house (+ slideshow).

New Deal Design's Beep device is an 88-millimetre square plate dominated by a large faceted dial, which references the form of "the keystone of audio interaction".

The product is finished in either gun metal or copper, and can be placed onto any flat surface or mounted onto a wall.

It also allows them to play music via their Wi-Fi network through the existing speakers within the home, in a similar way to Paul Cocksedge's Vamp product launched in 2013.

"With Beep, the starting point was to build something small and unobtrusive, yet with noticeable presence," said Amit. "Balancing 'loud' and 'quiet' design vernaculars was important to the overall aesthetic, as was ensuring it was inviting and comfortable to use." 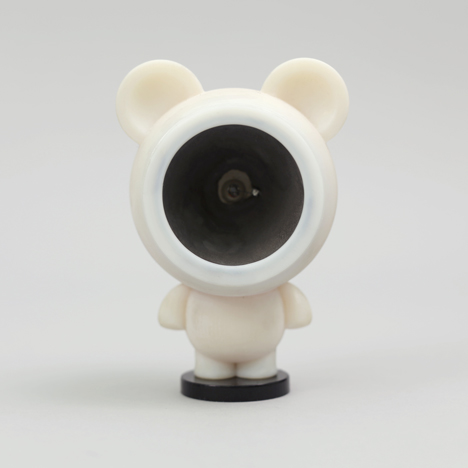 The large dial is tilted at a 45-degree angle to ensure the button is readily visible, whether it is sitting flat on a table or mounted to the wall.

No app or login is required. Instead, functions such as volume, pause, advance and play are controlled through the dial.

These are visualised with pre-programmed patterns created by a series of 24 LED lights hidden underneath the music player's surface.

"LEDs light up the retro face, adding to the emotive interface and gently reminding the user that Beep is on," said Amit.

The product is made from an injection-moulded polycarbonate enclosure and a zinc-alloy structure – assembled by hand in San Francisco.

Multiple Beeps can also be set up around the house as "groups" that stream different music into different spaces in the home.