Architect Matt Gibson drew inspiration from mid-century Modernist architecture in Brazil for the design of this concrete and stone house in a Melbourne suburb (+ slideshow).

Gibson, who has studios in both Sydney and Melbourne, designed Concrete House to provide the home for the family of a commercial builder specialising in masonry.

This client requested a house built from concrete and stone palette, but also asked for it to reference the architecture of Brazilian Modernists such as Oscar Niemeyer, Lucio Costa and Paulo Mendes Da Rocha – whose work often features bold forms, protruding volumes and raw concrete surfaces.

"Concrete House utilises concrete as a major construction material and the defining element of the building's architecture – in so doing expressing the owner and his craft," said the studio. 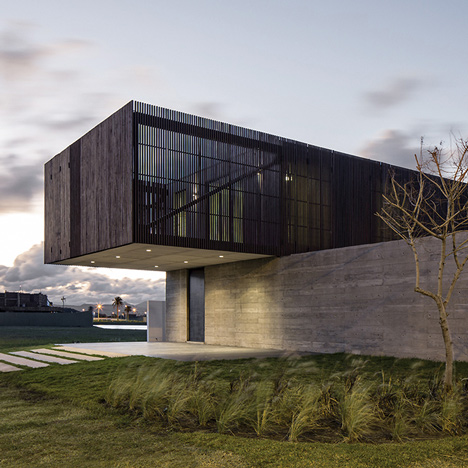 "With nods to the desired mid-century Modernist brief, the compositional palette – along with the use of the client's specially sourced stone on the exterior – is designed specific to client needs," it added.

The house comprises a pair of horizontally lying two-storey blocks made from concrete, wood and stone, which have been placed side by side.

Living spaces on the lower and upper floors are positioned in the block nearest the rear garden, while bedrooms and entrance points face the street.

The property is set 10 metres away from the edge of the street. An opaque wooden screen runs along this front facade at ground level to provide privacy.

The entrance to the house is located in this facade, as is a huge lift that can be used to lower the client's car into an underground parking space.

"The tapered concrete form provides a lens to maximise views to both front and rear whilst east and west elevations are windowless and restrict sight lines to neighbours," said the team.

Inside, a double-height living room with an integrated concrete chimney breast is set at the heart of the property.

Glazed doors link the lounge to the back garden, which was designed by Australian landscape architect Rick Eckersley. It features pockets of planting set into concrete patios, as well as a tennis court and a swimming pool.

"Vertical and horizontal material connections are woven through the interiors," added the team. "White plaster, used for practical purposes, is interspersed amongst timber, stone and concrete allowing a natural backdrop for the clients' lifestyle, furniture and artwork."

This primary living area is overlooked by a smaller snug on the upper floor, which also features three bedrooms. A decked balcony runs along the garden-facing facade.

The house shares many characteristics with many recently completed houses in Brazil, from Casa Cubo by Studio MK27, which features a living room that appears to have no walls, to a bulky concrete home Isay Weinfeld designed for a graphic designer in São Paulo.