The KA300 Pavilion, which opened earlier this week, comprises a wonky three-dimensional grid of crisscrossing timber members, framing a flexible events space that will host various activities throughout the summer.

Each of the upright elements points towards the heart of the three-century-old city, which has become famous for a radial layout that surrounds a Baroque palace.

"The twisted pattern of the pavilion refers to the strictly geometric, radial layout of the Baroque-planned city of Karlsruhe with the palace as the focal point, transforming it into a spatial field of lines," said J Mayer H in a statement. 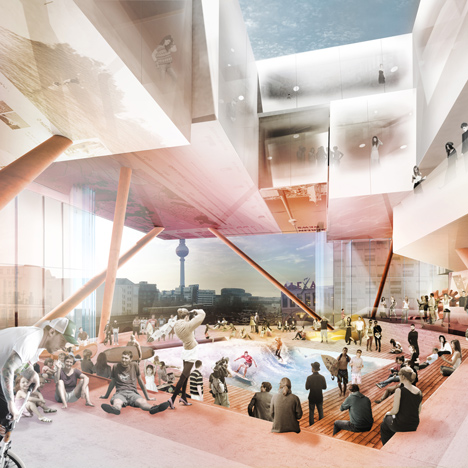 "On several layers in and on the structure, exhibition platforms, resting spaces, and viewing platforms emerge."

The city's radial plan includes 32 circulating streets and avenues, as well as the Schlossgarten park. This is where the pavilion has been constructed, in the area north west of the palace, or "Schloss".

The structure's outline is defined by over 50 vertical columns that surround a hollow interior. This space features a stage, allowing the building to be used as both an indoor auditorium, or for outdoor film screenings and performances.

It also accommodates a cafe, an information point and various informal seating areas, while stairs lead up to a viewing platform on the roof.

J Mayer H won a competition to design the pavilion in early 2014, following on from the firm's Metropol Parasol project in Seville, Spain, that also employed a timber lattice construction.

The studio worked closely with wood manufacturer Rubner to calculate the exact details of the fabrication, which started in February, and the pavilion opened to the public on 20 June.

The structure will remain in place until September, before being dismantled and moved for use in a new location.

The studio, led by architect Jürgen Mayer-Hermann, is also currently working on a shopping centre near Berlin's Alexanderplatz.

Photography is by Frank Dinger, apart from where otherwise credited.