A pair of students have created a conceptual prototype for a countertop 3D printer that people could use to make meat in their own homes (+ movie).

Cultivator by Sarah Mautsch and Aaron Abentheuer is an open-source prototype machine intended to fuel the discussion about the future of bio-printing – a technology already being developed for recreating human organs in experimental medicine.

The project by the duo from the University of Applied Sciences Schwäbisch Gmünd aims to tap into the current debate about the future of food production for growing populations with limited resources.

The current model, made from acrylic glass and deep-drawn polystyrene, has been designed based on the assumed development of this technology over the next 30 years.

"This is a speculative design project, so the device itself is not production ready," Abentheuer told Dezeen. "But considering this technology exists today (although it is very expensive), one can imagine that technology will evolve, get cheaper and smaller to produce, so something like Cultivator can definitely exist in 10 to 30 years time in the kitchen of the future." 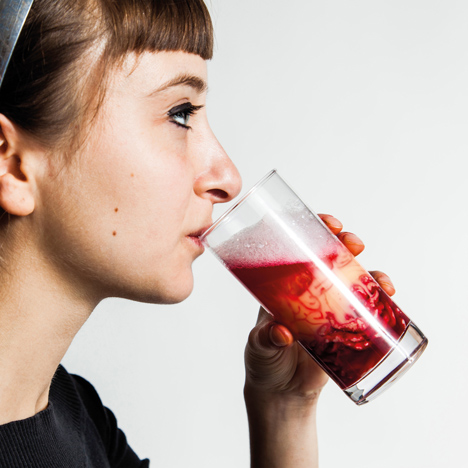 The device could be programmed with the user's preferences and dietary requirements to create bespoke meat, printed from muscle and skin cells, to meet their needs.

An Adapt Nutritional Values tool, which the designers compare the to Magic Wand tool in Photoshop, would enable users to adjust qualities like fat content without compromising the taste or texture of the meat.

However, the result would be arbitrary forms unrelated to animal parts. It would be possible to create flesh and fat, but not bone.

"Skeuomorphism [the design concept of making representational items resemble their real-world counterparts] has been widely debated over the last several years in software design but is actually something that is relevant to food as well in the future," said the designers, who suggest a chequered slab of alternating chicken and beef pieces as one possible outcome of the project.

A solar panel would enable the device to be self-sufficient in the light-flooded kitchens of the future, according to the designers, and it could also use the house's electricity supply in the absence of sufficient natural light.

The Cultivator is intended to act as a conversation starter about the development of meat culture.

It is one of a series of recent attempts to consider and explore the future of synthetic food, which could become necessary to overcome the environmental and animal-welfare concerns associated with current methods of large-scale meat production.

A Dutch artist launched a virtual restaurant featuring a menu of conceptual dishes that could be made possible by lab-grown meat, while a Royal College of Art student imagined how products made from enzyme-enhanced bioplastics could produce essential nutrients as a substitute for traditional food resources.