Offices and meeting rooms are nestled among tropical plants in this wealth management centre in Singapore by local studio Ministry of Design.

The brief set out by Citibank was to create a wealth management centre dedicated to its high net-worth clients, over an area of 2,787 square metres across floors six to nine of an office building on Singapore's Orchard Road.

Across its four levels, the Citi Wealth Hub has more than 30 client advisory rooms alongside flexible office and event spaces, making it the bank's largest wealth advisory hub in the world.

The site is distinguished by its soaring atrium with tinted glass walls and skylights that create ideal conditions for growing tropical plants.

In recognition of this, the studio proposed an office scheme based around a lush conservatory that would anchor the entire office.

On floors seven and eight, a series of social spaces are nestled within the greenery, including a bar, observation deck, garden pods, banquette seating and a central garden lounge with a honed Grigio Carnico marble bar.

"The choreographed verdant and lush greenery evokes an atmosphere where everything seems to flourish in a natural and sustainable manner – a nod to the ideals of wealth management," said Ministry of Design's (MOD) director of development Joy Chan Seah.

"Although drawing from the virtues of biophilic design, the scheme aims to create a cultured conservatory and not a wild forest," she added. "Introducing a measure of control and order amidst nature's abundance, we created a series of carefully detailed planter box arrangements."

These sinuous, hairline brass containers are lit from below to signpost pathways and meeting spaces among the foliage.

On the seventh floor, garden pods were installed as an alternative to traditional meeting rooms. These are lined with acoustic panels and equipped with curved TV screens, concealed power points and cables for connecting laptops.

In collaboration with landscape architecture studio ICN Design, MOD carefully selected plants that would adapt easily to an air-conditioned environment, thrive even in the shade and create four distinct vertical layers to offer varied views at every level.

For the tallest level, the designers selected betel nut feature palms, while elegant, feathery parlour palms sit below their crowns at the second level with bushy saplings and big-leafed arums in the foreground.

The eighth floor is dedicated to Citigold Private Clients, leading the design team to opt for more luxurious materials such as walnut and marble, while an observation deck offers aerial views of the conservatory on the level below.

Since this floor is less open to natural daylight, the planting here is smaller in both the horizontal and vertical scale, with planters set between desk alcoves and pathways.

They hold a variety of hot desks, collaboration tables and a town hall for meetings.

Large planters help create a calming work environment on these levels and are filled with shade-loving plants that, in the wild, would grow low on the rainforest floor.

Throughout the office, the temperature of the lighting is programmed to mirror human's natural circadian rhythm and the movement of the sun, changing from blue to reddish undertones over the course of the day.

To keep the plants healthy the project uses a hydroponic system, in which plants are held in place by absorbent granules instead of soil.

"We've had really good responses from Citibank and from their clients so far," the studio said. "They've said this is unlike any other wealth management hub they have seen." 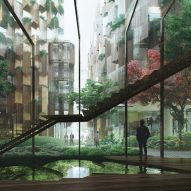 10 plant-covered buildings that point to a greener future

Studies have shown that access to green spaces, or even pictures of nature, can benefit workers' mental health and improve performance in the office.

As a result, a plethora of plant-filled workplace interiors have sprung up over the past few years, including this co-working space in Lisbon with over 1,000 potted plants and trees, while tropical flora provides privacy for workers inside an office in Utrecht.