Paris studio LAN Architecture has created a collection of ice cream-coloured buildings called Nolistra in Strasbourg, France, which are set around a communal garden.

Located in the area between the Saint-Urban cemetery and the Parc de l'Etoile, the buildings are each different colours, ranging from dark, greyish blue to pale pistachio green and bubblegum pink.

Nolistra sits on an "urban island" that is hemmed in by two roads, in-between Strasbourg's historical district and a 1960s expansion of the borough.

In order to create an identity for the development, which has housing units as well as commercial space, a hotel and offices, the studio looked to the surroundings colourful buildings.

"From the beginning of the project we were searching for a form and strategy that could express continuity and at the same time a strong identity in itself," Local Architecture Network (LAN) Architecture co-founder Umberto Napolitano told Dezeen.

"We tried to use what the city already offered us, and Strasbourg is a city that is extremely defined by the colours," Napolitano explained.

"The idea was to use colour as a tool that could express continuity with the elements that were already there – on one side there is a pink building which was one of the first we had to relate to, and there is this very small architecture of the cemetery which is blue, then there is a square made of [red] Bordeaux stone," he said.

"So little by little the neighbourhood started to inform the project."

The residential part of the development comprises 178 apartments spread over six of the buildings, including a dark-blue 18-storey tower.

Another building will hold a hotel and the last block will house office spaces.

All the blocks are united with a repetitive facade design that features symmetrical set-back windows grouped in sets of four.

"If you go in the historical centre, what the succession of different areas of urbanisation have in common is a strong variety of colour and a kind of light motif of the windows," Napolitano said.

"The windows express a level of abstraction, so when you see the addition of all these windows it becomes a texture, in a sense, but when you go close you see the details, the shadow and light."

The Nolistra city block sits around a communal garden and the buildings also feature roof terraces. The studio chose to use plants that were suitable for the area and could be found in the cemetery on one side of the development and the park on the other.

"The garden has evolved a lot," Napolitano explained. 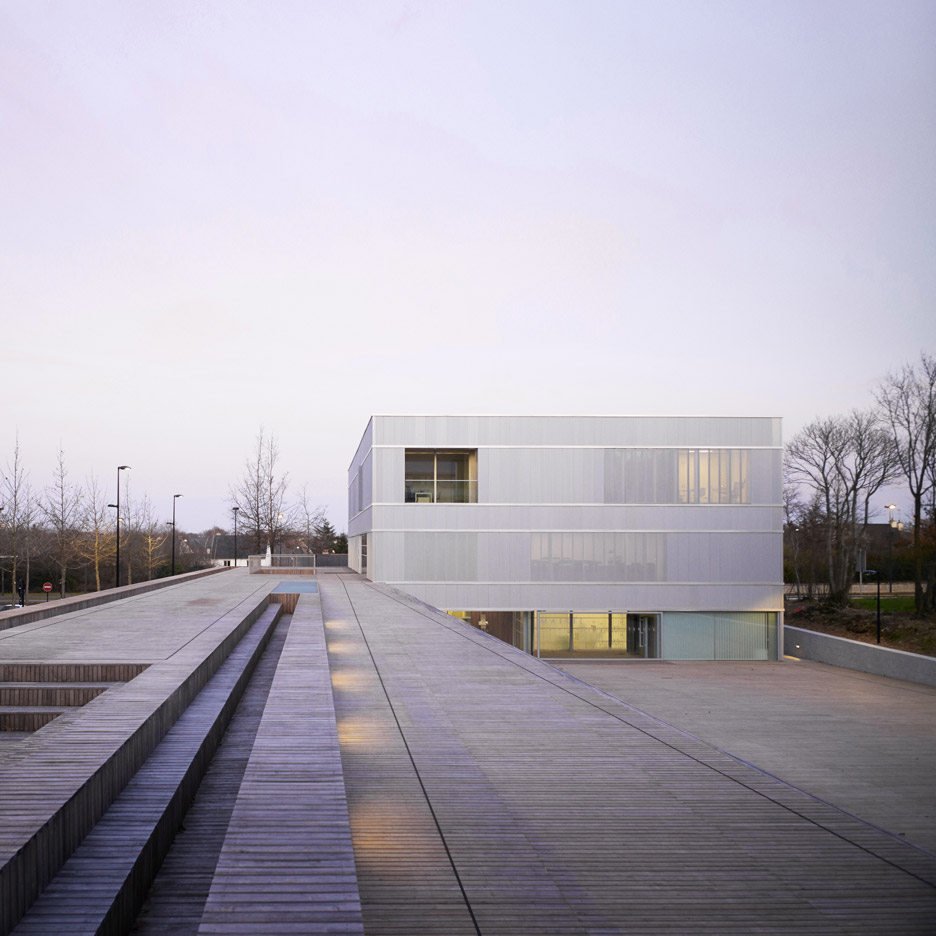 "In the beginning it was something more domestic but it has evolved, step by step, into something that in five years will be extremely wild," he added.

"It was interesting because it's not always easy to convince someone in a project that's mainly housing to have a garden that you can't completely control."

Nolistra, which the studio called "a first architectural response to the public health crisis we've been experiencing since March 2020," was designed to have open interiors with ample natural light.

The apartments all have loggias, or winter gardens, which can be used as extra rooms in the summer.

"Each flat has one more room that you can keep as an exterior space or decide to close," Napolitano said. "The windows are already there – now it has been delivered as an external loggia that you can close in the winter."

The studio also focused on creating a dense development that would have a sense of community, but not create the feeling that people are living on top of each other.

"The colour is the element is that overrides everything, but there has been a lot of effort made on flexibility and how to generate a very dense district," Napolitano said.

"Using density for equality, such as sharing of resources and sense of community, without having this failed density where people are too close to one another and have too much in common."

The housing part of the development comprises free, assisted or intermediate ownership, as well as social housing.

"It's an even more interesting project because of the problem of social housing – how do you create community without exclusion?" Napolitano said. "This project has a mixed population and a mix of uses."

Photography is by Charly Broyez unless otherwise stated.

LAN Architecture has previously created a French town hall with a perforated metal skin and a weathering-steel clad prison with a pastel sports court.