Photo essay: French photographer Jérémie Souteyrat trained himself to photograph architecture after moving to Tokyo, by hunting down and documenting some of the best private houses in his adopted city.

"As far as Tokyo is concerned, Westerners too often know little apart from the high-rise buildings of Shibuya and Shinjuku and the packed crowds of these commercial districts," said Souteyrat. "But Tokyo is, in fact, a horizontal city, with a lower per unit density than Paris."

In this exclusive photo essay, the photographer explains how he spent four years creating images of Tokyo houses by a range of architects – including firms like Atelier Bow Wow and ALX.

Related content: see all of the Japanese houses on Dezeen

"Tokyo has no style, that's why I like it. It's full of surprises, even though it's not a total mess – everything is very organised," he says in the essay.

"Architecture photography is often only PR photography, so I had a documentary approach: no lies, the pictures had to tell what the houses look like when they are used."

These photographs form part of Souteyrat's Tokyo No Ie (Tokyo Houses) series, which has now been released as a book by French publisher Le Lézard Noir, with an afterword by Japanese architect Kengo Kuma.

I moved from Paris to Tokyo in 2009 and started to work as a freelance professional photographer when I arrived in Tokyo, as I had had a regular job in France. As a documentary photographer I received assignments from magazines and newspapers for cultural and social features. One day someone asked me if I could take architecture pictures as well and I replied "of course!".

At that time I was shooting with a tiny Leica and I had no experience in architectural photography. I had to buy a proper lens and camera for this assignment. This was my first step as a photographer into the architecture world, even though I have been interested in architecture since I came to Japan.

A few months after this assignment, I thought about starting a personal project. I really wanted to document the tiny streets of Tokyo, which are not the image Westerners have in mind when they think about Tokyo. At the same time I wanted to use my new equipment to photograph the architecture of the city, so I decided to focus on the most amazing architecture one can find in Tokyo's residential neighborhoods: contemporary houses.

When I settled down in Tokyo, I discovered an architecture magazine published only in Japan and Japanese, called Jutakutokushu. Every month if featured about 20 houses from all around Japan. I was fascinated by the quality and originality of those houses. It was nothing compared to what one can built in France. I had the idea to build a series, featuring some of these houses and their environment, so that one can feel the atmosphere and life of Tokyo's residential neighbourhoods.

I wanted to show the houses as they were used, with cars, curtains, dirtiness, etc. Architecture photography is often only PR photography, so I had a documentary approach: no lies, the pictures had to tell what the houses look like when they are used.

There are so many interesting houses all around Japan, so I had to restrict it as much as I could to build a coherent series. I decided to shoot only houses in the Tokyo metropolitan area and built after 2000 – they are the houses of the 21st century.

Even though Tokyo is less dense than cities like Paris, the capital of Japan is denser than other Japanese cities. So the land for houses is much smaller, with an average plot size of 70 square metres. The houses are pretty small and usually built on three storeys. They can even look like tall buildings in denser parts of the city, just a few meters wide and 20 metres high. One of them (Kudan house by Sakane Keikaku), featured in the book, is so narrow and tall than she can disappear in the folding of the book. Architects and residents have to deal with the density and the smallness of the plots. The private spaces are often hidden and it's common to see no windows from the street.

Houses are usually destroyed every 25 years in Japan and the inheritance taxes push families to sell half of their land. That's why the sites are so tiny now, and in Tokyo private gardens have mostly disappeared. The only space left in front of the house is for the car, as one has to own one's own car park to possess a car. But it does mean that there are many opportunities for architects to build houses in Tokyo.

Difficult conditions can be a trigger for high creativity. But apart from the rules about maximum volume and size, architects are pretty free to build what they like, as long as the clients agree. There are almost no standards for construction in Japan, compared to other countries.

It's good to have construction standards and rules like we have in Western countries, but I wish architects could be more free to design and build contemporary houses and buildings to bring some variety, surprise and beauty to the city.

Tokyo has no style, that's why I like it

Tokyo has no style, that's why I like it. It's full of surprises, even though it's not a total mess – everything is very organised. Some architects have a very structural approach with amazing shapes, like Architecton or Atelier Tekuto, but some have a very good sense of space, even though the houses are not so spectacular, like Atelier Bow-Wow.

When I was choosing which houses to shoot, their shape had to be amazing or their relationship to the street had to be surprising. It had to be something I had never seen before and difficult to imagine in another country.

I didn't care about which architect had designed the project, I was interested in the house and its location. I wish I could have included houses by Toyo Ito, Tadao Ando or Mikan but it didn't fit in with my selection.

Also, as the goal was also to document everyday life in residential neighbourhoods in Tokyo, the environment was very important. I wanted the series to reflect the Japanese way of life so I also chose houses near schools, cherry blossom trees, bus stops, etc. – places where I knew I could find good photo opportunities.

I wanted the series to reflect the Japanese way of life

I found the houses in Japanese magazines or on the websites of architects. Then I had to find the locations, as in the beginning the architects didn't want to send me the addresses to preserve the privacy of their clients.

At that time I had no publisher and the architects didn't consider the project as serious. So I spent many hours and days on Google Maps and on the internet, searching for the houses. This was the longest and most difficult part of the project!

After searching for the locations and information about the houses for so long beforehand, it was always a (nice or bad) surprise to discover what each one looks like "for real". For instance I went to shoot the Curtain House by Shigeru Ban, which is a bit older but such an iconic house I had to try to add it to the project. Unfortunately, the house had nothing to do with the newly-built house everybody knows – the concept was probably too strong for the clients and it was in very bad shape. At that time it was 15 years old and it will probably be torn down soon.

I had some good surprises with the local people I met. One of them invited me to visit his house and I also had sometime friendly exchanges with the neighbours. On the other side, in areas with a lot of elderly people I was more or less chased away by the neighbours when it was turning dark. They were afraid to see a foreigner taking pictures at night. 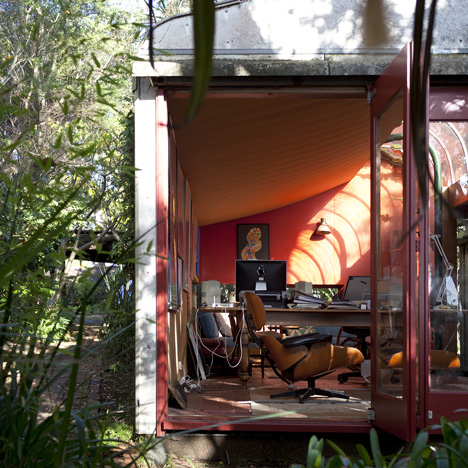 People rarely stop to watch what's happening around them, it's bad manners in Japan

It was a fantastic opportunity to discover Tokyo. Every neighbourhood is a small village and while waiting for the good picture to happen in front of the houses, I had the chance to spend some time just observing everyday life in Tokyo.

People rarely stop on a bench or in a garden to watch what's happening around them, it's bad manners in Japan and Tokyo is a moving city. So the experience of being able to see Tokyo through my camera was very rich and important to me.