In the age of the multiplex cinema, photographer Matt Lambros has scoped out the older, lavishly decorated movie theatres to capture what was left behind after the credits rolled for the last time.

Many of the theatres in Lambros' series started life as live performance venues, but were converted to show motion pictures as demand grew for screening Hollywood blockbusters.

However, as multiplex theatres – which more conveniently show many films at once – proliferated towards the end of the 20th century, the boutique spaces were abandoned and left in various states of decay.

Lambros recently released a book titled After the Final Curtain: The Fall of the American Movie Theater, which brings together the best images from his visits to over 100 of these forgotten spaces.

The photographer describes his fascination with abandoned buildings in this exclusive essay for Dezeen:

My grandmother looked after me a lot when I was growing up. She has always been an inquisitive, somewhat nosy person, and she exhibited those traits most clearly when she took my younger brother and I into old barns she had found while driving around my hometown in Dutchess County, New York.

Sure, it was trespassing, and had the barns' owners happened upon us while we were exploring the old buildings, I doubt they would have been pleased. As a five-year-old kid, none of those worries crossed my mind.

Even then, I was fascinated by my grandma's wonder. She would run her hands along the weather-worn wood and ask us how old we thought the building was, and what it had seen in its lifetime.

She told us to try to see the story behind the rotting bales of hay that sat, unused, for what must have been years, and in the rusted farming equipment that was somehow left behind. She was fascinated by all this lost history, and her curiosity made a lasting impression on me.

Sure, it was trespassing

Growing up in Dutchess County, I had plenty of opportunities to continue to investigate abandoned buildings. For a time, abandoned state hospitals like Hudson River State Hospital held my interest, being one of the most well known (and supposedly "haunted") abandoned buildings in the area.

Eventually, I began to carry a camera when I explored abandoned buildings, and what was once a casual, passing interest became a vehicle for artistic expression. I enrolled in Boston University's photography and imaging program, and began to see abandoned photography as less of an interest than a way of life.

In 2008, I went to see a movie at the Village East Cinemas in Manhattan. Like most people who grew up in the 1980s and 1990s, I thought that movies were only shown in small, dark, nondescript theatres.

I had never seen one that was at all distinguishable from the multiplex in the next town, and the town after that, and so on. I couldn't tell you what movie I saw that day at the Village East, because I couldn't have watched more than ten minutes of it.

I was too busy looking around at the beautiful architecture and interior design. I didn't think that there was any way that a theatre that beautiful could have been used for showing movies. As it turns out, I was right. The Village East opened in 1926 as the Yiddish Art Theater and was converted to show films in 1992.

A chance for restoration and reuse

I was hooked. Since that day, I have visited and photographed almost 100 theatres, from the sad and shockingly beautiful Loew's Kings Theatre in Brooklyn, to the almost completely decayed Proctor's Palace in Newark, New Jersey.

I have dedicated almost 10 years to the further exploration and documentation of the history and architecture of the great 20th century American movie palaces. In late 2015 I began to put together my first book, After the Final Curtain: The Fall of the American Movie Theater, as a showcase of the beginning of the project as well as to help increase public knowledge of these buildings plight.

As more awareness is raised, I have more and more hope that some light will be shed on these forgotten buildings, perhaps giving them a chance for restoration and reuse. 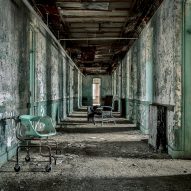