Square windows puncture the timber facade of this townhouse in Ghent, Belgium, which has been recently refurbished and widened to make room for three new flats (+ slideshow).

Named Puinhuis after the street it is located on, the four-storey building has been transformed from an ageing single property into a "jigsaw" of different homes – one multi-storey family residence and three compact studio flats.

FELT co-founder Jasper Stevens started the project while working at another local firm, 360 Architecten,with whom he collaborated throughout the project. The brief called for a more flexible layout, with various spaces that can be rented out.

Rather than extending the building back into the garden, the architect was instead able to widen the structure, creating plenty of space for an extra entrance fronting the street.

This street-facing facade was given a new coat of white paint to help it fit with the neighbours, and features a traditional grid of rectangular windows and doors. But the new end wall was treated differently – clad with heat-treated ash slats and punctured by square windows in various sizes.

"The frontal facade is an iteration of the adjacent classical rhythm and white stucco," explained Stevens. "In contrast, the lateral facade is highly specific, suiting its role as the corner piece of the street." 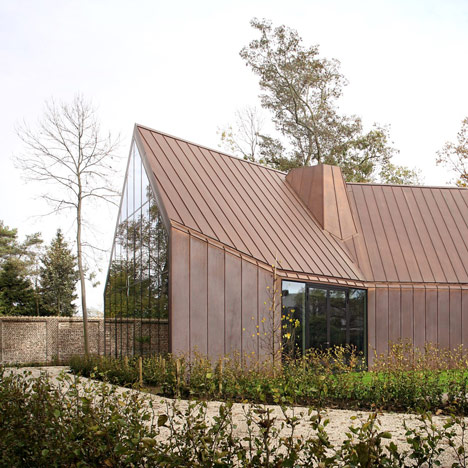 "The shape still refers to the blank facade of the old building but the wooden vertical cladding and a series of seemingly randomly arranged square windows clearly mark its singularity."

This contrast is emphasised by the use of slender window frames, flush edges and a clean simple roofline – a far cry from the protruding eaves and deep window recesses of the front wall.

The three new flats are all slotted into the spaces of the existing structure. The smallest can be found on the ground floor, the next one can be found two floors up on the second floor, while the largest occupies a space beneath the slanted roof.

All three homes are accessed via the original entranceway, which leads through to a communal staircase.

Additional entrances were added to both the front and the side walls to provide access to the family house. The first opens into a garage, while the other leads straight into a central hallway.

A home office occupies the rest of this floor. Living, dining and kitchen spaces take up the majority of the first floor, bedrooms are located on the second floor, and the uppermost level is described by Stevens as "a kind of crow's nest".

"[It is] a versatile space that could serve as workshop, guest room or private sanctuary, containing a small outside space where one can enjoy the magnificent view of the nearby river and marvel at the gloaming sundown," he said.

The architect also claims the layout could easily be adapted to suit the needs of future occupants.

"For instance, the main floor could be rented out as a doctors practice or the crow's nest could be added to the top studio, creating a luxury penthouse," he added.

The project also included the reworking of a "secret garden" at the rear of the building, which now boasts long narrow paving slabs, slate pebbles and various plants and shrubs.