The design is formed from two connected balls that are surrounded by horizontal metal rings to create a stepped profile.

"The name Pulcina refers to the shape of its interior, the part on the inside that's hidden from view," said De Lucchi. "It's plump, bulbous, has a stepped silhouette and a red handle. Not surprisingly, the spout recalls a beak."

The Italian designer was one of the founding members of the 1980s Memphis Group, which is credited with introducing Postmodernism into design. His best known designs for the group include the First Chair, comprising circles and spheres, and a set of pastel-coloured appliances with unusual shapes.

De Lucchi's new coffee maker is being produced by Italian brand Alessi, which has a catalogue that features some of the most iconic Postmodern kitchenware designs, including the conical 9093 kettle by Michael Graves and the UFO-like Juicy Salif lemon squeezer by Philippe Starck. 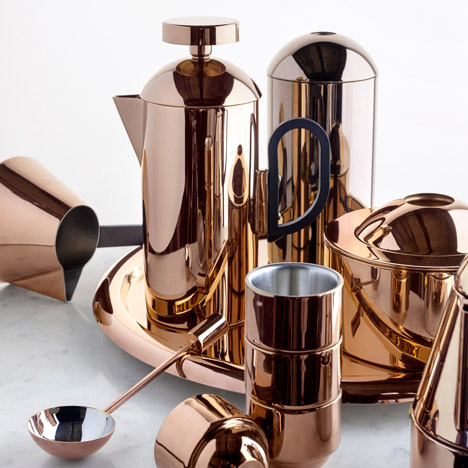 Pulcina's internal shape is designed to automatically stop filtering the coffee at the right moment, minimising the spitting of hot coffee through the spout that occurs when the liquid boils.

"The experts at Illy's research and development laboratory identified some important changes to be made to the espresso maker that would reduce, and nearly eliminate, the so-called Stromboli-volcano effect," explained Alberto Alessi.

The aluminium design is suitable for use on gas, electric or glass-ceramic hobs, while its insulated plastic handle – available in red or black – allows it to be picked up while hot.

Reminiscent of a chick's beak, the spout is shaped like a "V" to prevent drips after pouring.

"It's called Pulcina because I designed it in the Chioso where my private studio is located," said De Lucchi. "There, I work alone making my small sculptures and doing my little drawings."

"Originally, the Chioso was a large chicken coop with many hens, roosters and chicks. An epidemic in the year I was born caused them all to die, so in a sense, I can say that I was the only chick that survived."

Pulcina will be available in one-cup, three-cup and six-cup versions. The three-cup edition of Pulcina is set to launch exclusively at London department store Selfridges during the city's annual design festival, which is taking place from 19 to 27 September 2015.

Another Postmodern-influenced collection that will make its debut for the event is a range of home accessories and jewellery from London design store Darkroom.