The British fund bought into the brand for an unknown figure. The Alessi family retains the remaining 60 per cent of the company.

The brand, which produces kitchen items, tableware, watches and other household goods, is headed by Alberto Alessi, who said he had been looking for an investor to help the company compete internationally.

"Two years ago, at the turn of Alessi's centenary, the family started to look for a partner able to help us adapt to the new globalised world without losing our brand strength, spirit of research and design excellence," Alessi said.

"It was not easy, but with Oakley Capital we believe we have found just that partner. A new phase of Alessi's development will start very soon." 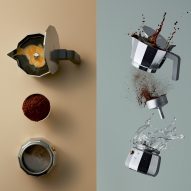 Oakley Capital said: "Oakley's strategy will focus on further strengthening and expanding the proposition of the brand by targeting new audiences and optimising the portfolio’s mix of products, pricing and distribution."

Alessi was founded in 1921 by Alberto Alessi's grandfather Giovanni Alessi.

In 2014 it employed around 500 people at its factory in Crusinallo in northern Italy and had an annual turnover is around €100 million.

One of the best-known of Italy's design-led manufacturers, Alessi started out making stainless steel utensils for the catering industry. It began collaborating with external designers in the 1950s and 1960s, branching into consumer products and becoming renowned for a stream of playful products.

Famous Alessi collaborations include the 9090 espresso machine designed by Richard Sapper, the Juicy Salif lemon squeezer by Philippe Starck and the 9092 kettle by Michael Graves, which featured a whistling bird on its spout.

In an interview with Dezeen in 2014, Alberto Alessi warned of the difficulties Italian brands face competing with overseas manufacturers.

"Maybe Italian production will disappear," he said at the time.