The Chinese architect's food-themed Niku rug takes its name from the Japanese word for meat, which the architect considers the "ultimate reward for the loyal labrador".

The woollen carpet features two colours and a pattern that mimics the marbling often found in raw meat. 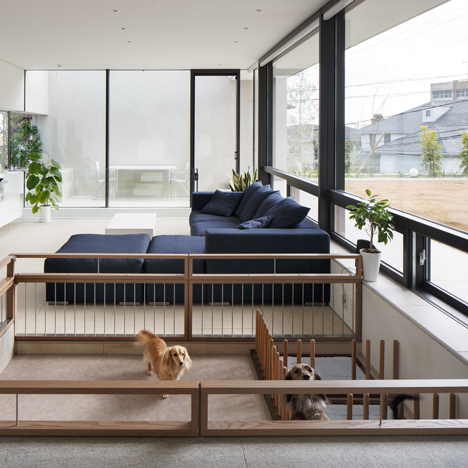 With three different sizes available, owners can upgrade to a larger size as their dog grows from puppy to adult.

The rugs are designed to be easily transportable, Yansong hopes it will help family members bond with their pet as it moves around the house.

Beijing-based MAD architects is better known for its building schemes modelled on the mountains, hills and lakes depicted in Chinese landscape paintings. Examples include a residential development in the studio's home city and a masterplan for the city of Nanjing.

Yansong's rugs have been designed as part of Japanese designer Kenya Hara's ongoing Architecture for Dogs project, which invited 13 architects and designers to "examine a new medium of architecture for dogs".

Each design in the collection references a specific breed of dog, taking into account and responding to their individual characteristics. The pieces aim to improve the relationships between pets and their owners.

The Niku rug will be on display at the Architecture for Dogs exhibition, which takes place at the Himalayas Museum in Shanghai, from 8 August to 11 October 2015.

Launched in 2012, Architecture for Dogs has seen Hara curate submissions from designers and architects around the world, including Toyo Ito, Shigeru Ban and Konstantin Grcic.

Since its inception, a growing collection of products have been exhibited in LA, Tokyo, Chengdu and Kanazawa.

Nendo also came up with a range of transformable accessories for dogs, while Whistle brought wearable technology to pets with a collar-mounted activity tracker.