The blackened timber home of Bergen-based architect Todd Saunders is lifted above the ground on two podiums, sheltering a patch of garden and a swing set beneath the living room (+ slideshow).

Todd Saunders, founder of Saunders Architecture created Villa S as a home for himself and his family in a disused park on the edge of a residential neighbourhood in Bergen, a city on the west coast of Norway.

"When you have a client you usually have a bit of resistance, or a soundboard to throw your ideas against," Saunders told Dezeen. "But when you're designing your own house the only discussions are in your head so it gets really schizophrenic sometimes."

"I talked to my kids quite a bit," he added. "They were three and five years old so they wanted swings – that was one of the nicest parts of the house, swings hanging under the house."

A horizontal volume raised on two legs protects a patio under the base of the house, providing a rainy-day play area for the two young children. Swings are strung from the underside of the volume, which contains the primary living space as well as a master suite and two children's bedrooms. 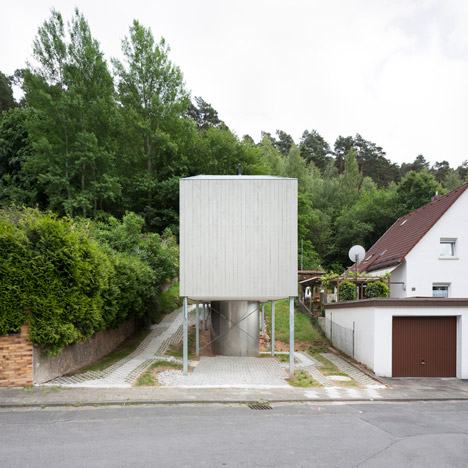 Two podiums that support this long block contain storage spaces for sporting equipment, a TV room and staircases, while a reading room is located in a small block that protrudes from the roof.

"The whole house is lifted off the ground because you get a much better view when you get up higher and by lifting the house suddenly you have 150-square-metre outdoor space that is free – it's like a large outdoor room created by moving the house up in the air," said Saunders.

The master bedroom and adjoining balcony are positioned at one end of the open-plan living and dining area, which leads to the children's bedrooms. A small window in one of these rooms looks directly into the kitchen, a peculiar request from the architect's young daughter.

"My oldest daughter had this strange request that she wanted to see the kitchen from her bedroom so we have this one window from her room so that she can look through the window of the kitchen," Saunders explained.

The pale timber and white-tiled interior spaces were designed by Swedish artist Hannes Wingate, who previously worked with Chicago architects Studio Gang. "He has really good taste," said Saunders. "That made the process quite pleasurable."

A reading room occupies a outcrop in the roof, which has access to terraces on either side. This area is clad in black-stained spruce, matching the building's other facades.

"Both my wife and I read a lot – the kids do as well – so we wanted a room just dedicated to books. That was probably the one thing that was the difference between a want and a need," said the architect. "We didn't really need that piece like you need a kitchen and a bathroom, but this library was a piece of luxury that was like a gift to ourselves."

Saunders said he referred to the work of local architect Leif Grung, who built approximately 45 timber houses in the area between 1935 and 1945, when coming up for the design for his home.

"It was kind of like a relay race – I took over the pin from him," said the architect. "I was the first person to make a new house in the area for about seventy years. I kind of borrowed ideas from him but integrated stuff that I've learned from living here for 17 years."

"It's like a new addition to contemporary Scandinavian architecture – a new chapter of what I think architecture on the west coast of Norway should be like," he said.

Photography is by Bent René Synnevåg.