Orange-hued panels of weathering steel encase the upper storey of this house in South Korea, which is elevated above the treetops of its mountain forest setting (+ slideshow).

The two-storey residence is named Hyunam, which means "black and shady cottage" according to the architect. It comprises a Corten steel volume that cantilevers over one side of its reinforced concrete base. 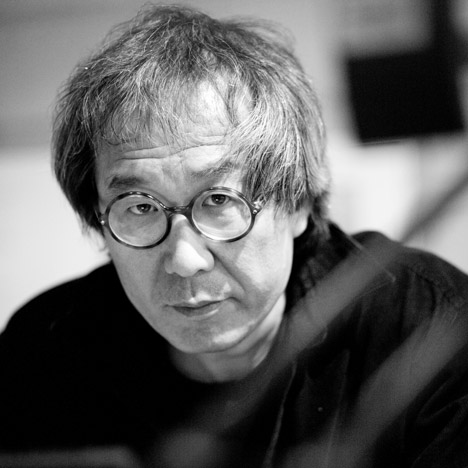 A boxy bay window protrudes from the western facade of the upper storey to offer residents uninterrupted views of the forest and of sunsets over a nearby reservoir.

Steps lead from an access trail up the inclined and planted roof to an observation spot with a rusty steel bench facing down over the treetops.

"The site is located in the centre of the mountain where you can see nothing but the mountain and the sky," said Seung H-Sang.

"When you see this house at a distance, you will find it protruded from the ground as if it has just come out of the underground into the world after waiting a long time."

The client planted five small botanical gardens along the access road that passes through the dense fir forest to the property. The building slopes up from the end of the garden trail, transforming the roof into an artificial hill covered with grasses.

A deep Corten-lined cut in the sloping roof provides access to the upper floor of the 137-square-metre property. Inside, two separate living spaces are linked by a spiral staircase.

Additional rooms including a bathroom and kitchen are located towards the back of the structure behind slatted timber screens and raw concrete walls.

"You have no idea of what you will see over the gate," said the architect. "Enter there and then you will find yourself in a deep embrace of the majestic natural landscape. No architectural concept exists there, only you and the nature in complete silence."

"When you climb on the hill and sit down on a cold Corten chair in the grass forest, you will feel like you are a part of the nature," he added.

Seung H-Sang was named Seoul's first city architect last year and in his new role is heading up a team of architects, planners and urbanists that will oversee the planning and bidding process for all public projects in the capital.

He previously worked with South Korean architect Kim Swoo Geun before setting up Iroje Architects & Planners in 1989, and also co-curated the Gwangju Design Biennale with Chinese artist Ai Weiwei in 2011.

Photography is by Jong Oh Kim.