This Tokyo house and office for a funeral director has been split into three sections so that two can be removed later, in case a planned road gets built through the site (+ slideshow).

Housecut was designed by Tokyo studio Starpilots for a couple in their 30s with two children, who had lived on the corner block and run their funeral business there for a long time.

Now the city has designated two thirds of the site for a road expansion, so the architects designed a new two-storey house and office for the family with three separate volumes, two of which can be removed if the new road gets built.

The ground floor is devoted to the funeral business, with a warehouse on one side, a coffee room and break room on the other side, and a reception desk and office in the middle. 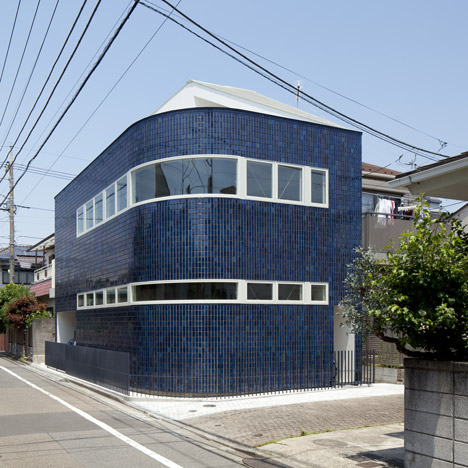 The top floor houses the family's living quarters. The parent's bedroom is in one wing, and the children's bedroom and a traditional washitsu room – which can be used for dining or receiving guests – are located in the other. A grassy courtyard has also been added between these two rooms to provide outdoor space for eating and playing.

The kitchen opens onto a double-height circulation space in the centre of the top floor, which is set back from the street to create room for a balcony at the front.

Other Japanese homes on Dezeen that deal with difficult urban sites include a 1.8-metre-wide house slotted between two buildings in Tokyo, and a home with a windowless concrete facade, which had to be set four metres back from the street to make way for a proposed road expansion.

In the warehouse on the ground floor, a miniature house-shaped structure built from oriented strand board (OSB) has been added for the toilet.

On the top floor, the family's bathroom has been placed within the roof pitch at the front of the house. It features a sunken bath and opens onto a small decked courtyard, which has two rectangular voids cut into the roof to provide light and ventilation.

Outside, the house has been clad with asphalt shingles in varying shades of green, giving the exterior an appearance similar to that of woven fabric.

The 195-square-metre house has two entrances – one at the front for clients, and one at the back for the family. It was built with a timber frame and took six months to construct.

Starpilots has completed a number of homes in Tokyo, including a shiny metal-clad house featured in a photo essay of the city's most interesting contemporary houses by French photographer Jérémie Souteyrat.