This umbrella-shaped street lamp by London designer Samuel Wilkinson has a crystal-covered canopy and allows passersby to leave augmented messages for their friends (+ slideshow).

Installed on a corner of Old Street in London, the 4.5-metre-tall Ommatidium sculpture features 1,500 faceted crystal lenses and is named after the individual parts that make up the compound eyes of many insects.

The structure has a matt black central steel rod, which tapers to a point, and holds a circular 3.2-metre-wide canopy that houses the hand-cut prisms in a metal grid.

Passersby can look up through the overhanging canopy to see a kaleidoscopic view of the sky above. The sculpture has been positioned to receive maximum sunlight, and casts refracted rainbows onto the street and people that stand beneath. 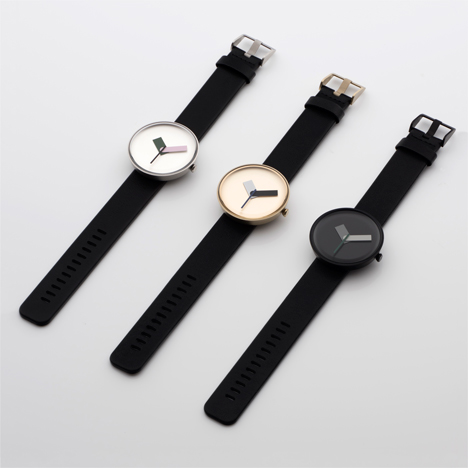 At night the lamp becomes a "gleaming beacon" with LEDs used to light up the canopy.

" This installation was never about designing a loud provocative object," said Wilkinson, who also created the award-winning Plumen 001 lightbulb.

"It was more to create something that fitted with the vernacular of street furniture. The challenge was to create the right experience, an interesting intervention, something with multiple layers that could react to the environment."

Ommatidium also features a digital element, working with the Traces augmented messaging app by San Francisco company Ripple Inc. The app allows passersby to retrieve location-specific information such as maps, community stories and deals for nearby shops and restaurants on their smartphone.

These take the form of images, videos and sounds that are overlaid onto a smartphone's camera display. Users can also leave messages for their friends to pick up on their phones when they visit the sculpture.

"By bringing together neuroscience and design, the Ommatidium and Traces facilitate the inherent creative nature of the brain by enabling people living, visiting and working in one of the most creative areas on the planet to gift their way of being and seeing to others – to augment our world with digital, rather than attempting to replace it," said Ripple CEO Beau Lotto, who worked with Wilkinson on the project.

Ommatidium was installed for London Design Festival 2015, but remained in place after the event concluded in September.

Wilkinson's other designs include a watch, a series of rotating lamps, and a set of faceted stationery.

Photography is by Sylvain Deleu.