Graphic designer Stefan Sagmeister's exhibition documenting his psychological and substance-related explorations into happiness has taken up residence at the MAK museum in Vienna (+ slideshow).

Sagmeister, who founded New York design studio Sagmeister & Walsh in 1993, put the exhibition together after a long period of research into methods of increasing happiness.

The Austrian designer spoke to psychologists and investigated everything from meditation to mood-altering drugs.

His experiments and outcomes are documented in a series of large-scale infographics, installations and oversized typographic pieces.

Graphics dotted about the show reveal various happiness-related statistics – such as levels compared across different countries, and the kinds of activities that create joy.

A wall of neon tubes only lights up to reveal its motivational messages when a nearby bicycle is pedalled, and a mischievous illustration on an elevator brings a naked couple together when the doors are closed.

Graphics of self help-style statements adorn the stairs leading up to the museum, and a pair of giant inflatable apes inhabit the atrium – one of which has arms that dangle over the upper balustrade.

Even the bathrooms of the museum have been decorated with handwritten commentaries by Sagmeister.

Visitors are invited to participate by pushing buttons, drawing symbols, or contributing to a "How happy are you?" installation by taking a piece of chewing gum from a line-up of tubes marked one to 10. 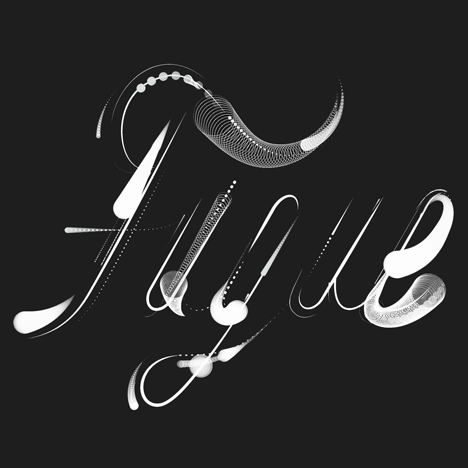 Sagmeister & Walsh creates a logo for Fugue that moves to music

A collection of disembodied mannequin hands hold out silver platters with the designer's favourite sweets for visitors to take.

"I normally find definitions rather boring," said Sagmeister, who also told Dezeen he thought the Star Wars poster was "ultimately a piece of shit" in an interview earlier this year.

"But happiness is such a huge topic that it is perhaps worth a try," he added.

The exhibition was originally shown at the Institute of Contemporary Art in Philadelphia in 2012, and has also travelled to Vancouver and Paris.