Swedish car manufacturer Volvo has unveiled an autonomous vehicle concept that allows drivers to relinquish the controls when their journey gets boring (+ movie).

According to the auto brand's latest research, most people would be happy to delegate the task of driving to a computer when travelling long distances or caught up in congested streets.

Volvo's Concept 26 project, named after the average daily commute time of 26 minutes, was therefore designed to allow drivers to sit back and relax whenever they want.

When Relax mode is selected mid-journey, the steering wheel retracts and the driver's seat fully reclines. The vehicle would be fully autonomous at this stage.

Create mode prompts the seat to move backwards from the driving position, while a table slides out from the driver's-side door to provide a work surface. A large display also emerges from the dashboard.

"It's all about people," said Volvo's interior design chief Robin Page. "Our research clearly shows that some people will want to use their commuting time creatively when they have full autonomous drive available, while others will want to just sit back and relax, watch online media or listen to music."

The seats and interior furnishings realign again when the driver wishes to retake control of the vehicle. 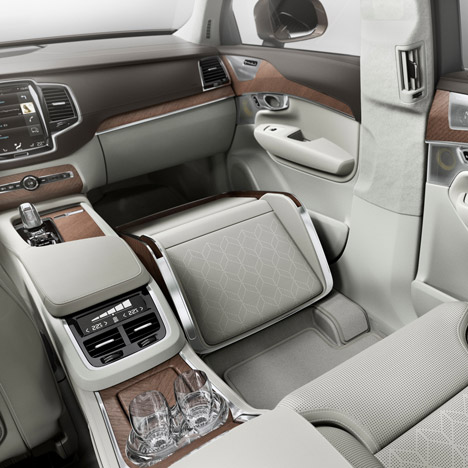 "With these three modes the concept creates a new autonomous drive innovation platform that can adapt to new needs and technologies over time," said Volvo in a statement released yesterday. "Concept 26 embraces the need for radical change of the basic design of car interiors and provides a space that can be used as the driver/passenger wishes."

Volvo recently unveiled a vehicle interior with extra legroom for a chauffeur-driven passenger, similar to a business-class seat on an aeroplane. The Swedish company is also planning to test 100 self-driving vehicles on city streets with members of the public by 2017.

Self-driving cars are set to transform transport. Earlier this year, Elon Musk – billionaire founder of electric car company Tesla – said the act of driving a vehicle will be outlawed as soon as autonomous vehicles are proven to be safer for humans.

Other recent examples of driverless vehicles include Mercedes-Benz's self-driving truck, which will be operational on Europe's roads "within the next 10 years", and Google's pod-like vehicle that is currently being tested on public streets.

In February, the UK attempted to muscle in on the rush to develop driverless technologies by unveiling a self-driving "pod". "Driverless cars are the future," said transport minister Claire Perry at its launch, when she also outlined a regulatory framework for introducing driverless cars to British roads.