Dublin studio GKMP Architects added a pyramid-shaped roof to this compact house in rural Ireland to create some taller rooms inside.

House in Wexford was designed by GKMP Architects for a couple with three young children, who relocated from an urban apartment to the rural location in Wexford County on Ireland's south-east coast.

Occupying a large site that was previously farmland, it features lime-rendered walls and a pitched roof covered in slate to fit in with the local style.

"We wanted the house to have a simple form that recalled the vernacular architecture in the area," architect Michael Pike told Dezeen. "We did not want it to stand out or appear unnatural in the landscape."

The four-bedroom house, which has a 200-square-metre footprint, was also designed to "take pleasure in its compactness," according to Pike. 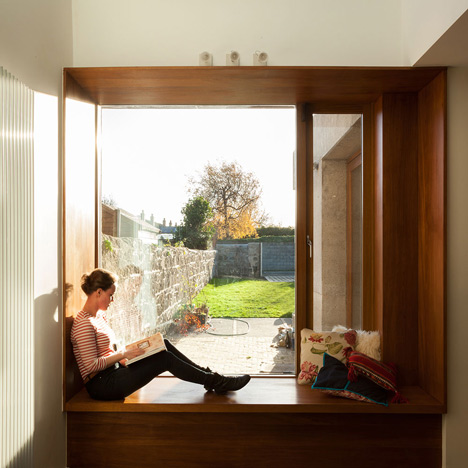 "We have deliberately sought to enclose the biggest volume in the smallest surface, and to recognise the formal virtue in this intrinsic economy," he said.

"If the plan is too spread out, the spaces tend to feel separate from each other. We enjoy the sense of close proximity and overlap that comes from making it compact."

To save space inside, the layout was designed without corridors. The ground floor has three bedrooms at the side, and an open-plan kitchen, dining room, living room and playroom, which all open onto each other.

These rooms are arranged around a central staircase, which leads up to a guest bedroom and study set into the roof's apex.

"We wanted to create a relaxed, free-flowing arrangement of spaces. It allows for different ways of moving around the house, which makes it feel more generous," said Pike.

The studio, whose other projects include a Dublin extension covered in vertical white tiles and an extension with a wooden window seat, added the pyramid-shaped roof to increase the sense of space inside.

The roof rises nearly three and a half metres from the eaves to the apex, and offers an internal height of six metres.

It is supported by four glulam beams – made from layers of timber stuck together to provide increased strength – which span up to 12 metres and rest on the external blockwork walls.

"This internal height was critical to give a sense of volume and generosity to the living space," said Pike.

"The entrance hall is deliberately low, at 2.25 metres, and then there is a real sense of release when you enter the living room. There is an enjoyment that comes from spaces that expand and contract – it creates diversity and interest throughout the house."

Slight level changes on the ground floor follow the slope of the land and create subtle divisions between the spaces, with the living room set two steps lower than the kitchen and dining area.

"We wanted to exploit the natural slope of the site," said Pike. "The changes in level help to differentiate the spaces, and also make the interior feel more like a part of the landscape."

Walls inside are lined with birch-faced plywood, chosen for its light appearance and affordability, and polished concrete provides the flooring.

"The concrete floor is easy to maintain and similar to the changes in levels, it gives the interior a sense of exteriority, making it feel more like a part of the landscape," said Pike.

Other Irish houses featured on Dezeen include a coastal house, also in County Wexford, built from locally sourced rubble, and a new brick home in Dublin with a windowless facade, designed to resemble a garden wall.

Construction for House in Wexford by GKMP Architects was completed in eight months.