David Leech Architects has built a two-storey house in Dublin that plays on the design of its neighbours to make something "ambiguous yet familiar".

Called, A House in a Garden, the project features a corner-glazed dining room that can be opened to the garden.

The house riffs on the design features of its neighbours – such as cream rendering and a pitched roof – and exaggerates them to create what David Leech Architects called a "contemporary translation of the ordinary suburban house".

The site sits at the end of a short 1940s terrace.

Organised around a cross-shaped core, the plan has been roughly split into four.

A library and dining room overlooking the garden, and a living room and kitchen sit on the more enclosed side of the site.

This arrangement creates what the practice called a "continuous loop of circulation" around the core, where the floors have been stepped to create a different ceiling height in each room.

Where these rooms overlook the garden with glazing, a recessed track has been added to allow them to be enclosed with a curtain when required.

In the dining room, glazed doors can be slid back to let the space spill out into the garden.

At first floor level the plan is split into three bedrooms and a bathroom, arranged around a landing space that is illuminated by a skylight within an extruded chimney stack emerging from the apex of the roof.

Where bedrooms sit below the slope of the roof, the roof the ceilings have been designed to bulge outwards slightly.

This creates a smooth sweep from the top of the roof down to the height of the doorways.

While the ground floor has been treated primarily with concrete, white walls and wooden-framed windows, more colour is introduced at the first floor. 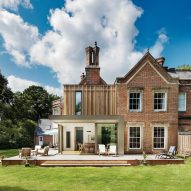 A datum of door-height dark wood lines on the landing space and coloured wood panels and wall elements fitted with storage line the bedrooms.

Certain areas of flooring have also been finished with a contrasting chequerboard pattern, including in the ground-floor dining room.

The rendered exterior of the home has been left roughcast where is faces the garden, and smoothed on the public-facing elevations.

The roof of fibre cement tiles has been finished with copper guttering and fixings, which will oxidise to a pale green over time.

Other residential projects recently completed in Ireland include Scullion Architects' brick house in a seaside village, and Tierney Haines' extension adding a writer's study to a home in Connemara.

Photography is by David Grandorge unless stated otherwise.