Created in a predominantly red and blue colour scheme, each of the 10 stamp designs features a different creature surrounding by tumbling snowflakes.

"I wanted to show how important it is to be together in December or to think of one another during this time," said Boontje, who served as head of Design Products at the Royal College of Art for four years.

"That's why I featured stories of people and animals on every stamp and ensured that there is interaction between the figures," he added.

The designer purposefully avoided the "normal Christmas clichés" and included animals such as foxes and swans, which aren't usually associated with the festive season. 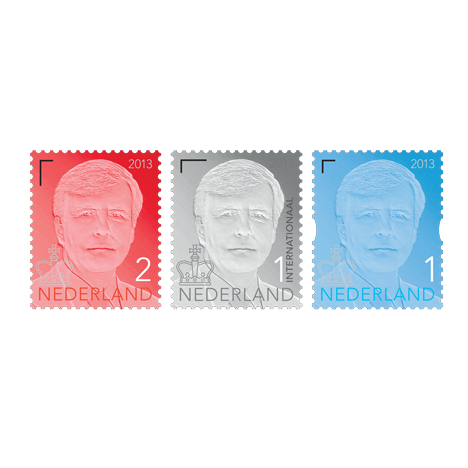 "As a counterbalance I used familiar elements such as deer, hares, squirrels, and pine trees," the designer added.

A pale blue stamp shows a swallow and peacock in flight, while another all-red design shows squirrels perched on trees that appear as if cut-out from the background.

Flashes of yellow are included on a stamp that shows a girl feeding a crow, while a colour contrast is created in another design showing a red fox nestled into an all-blue warren.

PostNL previously partnered with Dutch designer Daan Roosegaarde to create a set of 10 stamps that depicted the Netherlands as a spidery network of light, as seen from above.

The country has a history of commissioning designer stamps. Dutch designer Richard Hutten created an eight-page book for Royal TNT Post, and Belgian artists Studio Job designed a stamp for Dutch king Willem-Alexander that featured a digitally modelled image of his face.