A picturesque lake in Hampshire, England, is the setting for this fisherman's hut by Niall McLaughlin Architects, which can be opened up in summer and battened down in winter (+ slideshow).

Named the Fishing Hut, the wooden structure provides a place for the client to his store boats and fishing tackle, but also functions as a shelter and meeting place for local anglers during the summer fishing season, between April and September.

The intermittent use of the building provided the starting point for the design. McLaughlin – an Irish architect based in London – wanted the structure to be completely open to the elements when in use, but secure and weatherproof for the rest of the year.

It achieves this through a facade of wooden shutters, which fold up to allow views right through the interior. 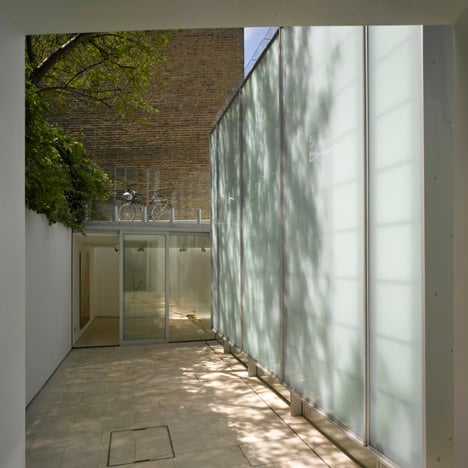 "It is closed for much of the year and opens up for the fishing season, so it had to be a closed and protected agricultural shed, but then also a pavilion for fishermen to look out over their grounds," the architect told Dezeen.

"We sought a form of shutter that gave the least visual intrusion on the continuous horizon," he added.

"By horizontally pivoting the shutters upward from the eaves the enclosure disappears, leaving you on a deck above the water beneath the pitched roof."

Fed by a typical Hampshire chalk stream, the lake is a natural habitat for migrating eels, brown trout and other freshwater fish. But it is actually manmade, built as part of a fish farm.

The opportunity to build a cabin over the water presented itself in 2011. The banks of the lake had deteriorated and silt had built up, so it was drained to allow repairs to be made. So at the same time, 18 concrete pad foundation were cast on the lakebed.

A steel frame was then built over the foundations, providing support for a timber floor and a glue-laminated oak superstructure. Oak panels line the interior, while the pitched softwood roof is covered with a more durable layer of aluminium.

The team deliberately left some sections of wood untreated, so that the exterior will gradually take a silver tone, while the interior will retain its golden hues.

"I imagined a fisherman rowing across to the building on a misty morning," explained McLaughlin.

"The exterior oak will have weathered to grey," he continued. "But as the shutters open up, they will be warm gold on the underside and they will be doubled by a reflection in the still water."

In plan, the cabin is divided up into 10 bays that each measure 1.8 metres wide. Some are enclosed, while others form open decks that are sheltered beneath the overhanging eaves.

A loft provides storage spaces for boats, freeing up the main floor to accommodate a kitchen and dining space, a small reception space and a toilet. There is also an external shower and a covered mooring.

Niall McLaughlin Architects is based in Camden, north London. Other projects by the studio include an elliptical stone chapel near Oxford and a house in southern Ireland built from Irish blue limestone.

The Fishing Hut was completed in late 2014. It has since won the RIBA Stephen Lawrence Prize 2015, which awards projects built for less than £1 million, and recently picked up first prize at the annual Wood Awards.