This English countryside residence was designed by Gresford Architects to be self-sufficient, but to still look and feel like a traditional, "normal" house (+ slideshow).

Located on the outskirts of a Berkshire village, the Old Water Tower is the home of practice co-founder Tom Gresford.

The property has been certified as a Passivhaus – a title granted to buildings that use natural methods of heating and cooling, rather than relying on electrical systems.

But Gresford Architects – which has offices in London and Oxford – didn't want the building to have the unwelcoming appearance that characterises so many other examples of sustainable architecture.

The team tried to instead create a building that fits in with the vernacular architecture of its rural setting.

"We have aimed to create a house that is on the cutting edge of sustainable design, yet eschews the hair-shirt approach to sustainable living that many people think of when considering environmentally friendly homes," Gresford Architects said.

"The house is conceived as a modern interpretation of the timber-framed barns of the area, that when seen from the distance reads as a simple, traditional, agricultural building," they added.

"On closer inspection it reveals itself as a crisply designed, carefully made, contemporary interpretation of the historic buildings it draws inspiration from."

The building is two storeys high, with a gabled roof and a facade of black-stained timber weatherboarding. 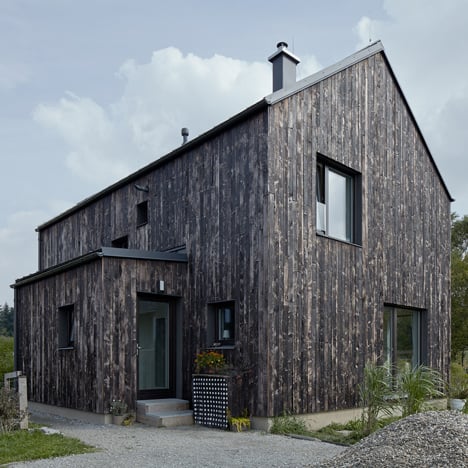 Windows and glass doors puncture all four facades, but are triple glazed to prevent heat loss. The smallest openings are on the north facade, where the most heat escapes, and on the east elevation, to preserve residents' privacy.

"The triple-glazed windows are openable, debunking the Passivhaus myth that the house must always be closed," said Gresford Architects.

"External blinds are automatically deployed on the east, south and west elevations when the internal temperature of the house reaches 21 degrees, thus reducing the chance of overheating."

The roof is clad with zinc standing-seam panels. The aim is for photovoltaic or solar thermal panels to eventually be fixed to its surface, which would allow the building to produce all of its own energy.

"The house is as easy to live in as any normal home, yet costs virtually nothing to run and could be entirely self-reliant if a suitable number of photovoltaic and solar thermal panels were fitted to the roof," added the team.

The layout of the building is fairly typical, with living spaces on the ground floor, and bedrooms and bathrooms upstairs.

The staircase forms the centre of the plan, separating the living room from the kitchen and dining area, and framing a utility room and study nook. This is in line with the current-trend for "broken-plan" rather than open-plan living.

Four bedrooms are located upstairs. "The four bedrooms have distinct characters, and all bar the guest room – which has an attic with storage and plant above it – take advantage of the roof form to create a feeling of space," added the team.

The Passivhaus standards were first developed in the 1990s in Germany. Other recent buildings designed to achieve Passivhaus status include a cooperative housing development in Brussels and a spaceship-like home in Madrid.

Photography is by Quintin Lake.