This family house in Shiga, Japan, is made up of two structures – a simple two-storey block set on a patio, and a small timber pavilion that opens out to a landscaped garden (+ slideshow).

Designed by local studio Alts Design Office, Maibara House was designed to offer its residents some spaces that are completely private, and some that allow them to chat to their neighbours.

The largest section of the 124-square-metre building is located on the northern side of the site. Coated externally with a textured white render, it presents a blank windowless wall to the street.

To the south, a corridor connects this block to the small pavilion-like structure, which functions as a communal living space. Unlike its neighbour, its facade can be completely opened up, allowing passersby to see any activities taking place inside.

"The client hoped for an open space, but also needed privacy," explained architects Sumiou Mizumoto and Yoshitaka Kuga, whose previous projects include a house with a secluded garden passage and an apartment where storage takes the place of walls.

"The first one is a privacy-minded house, that gives weight to the wellbeing of the family" they said. "The second one has public aspects, just like a park where anyone can pop in." 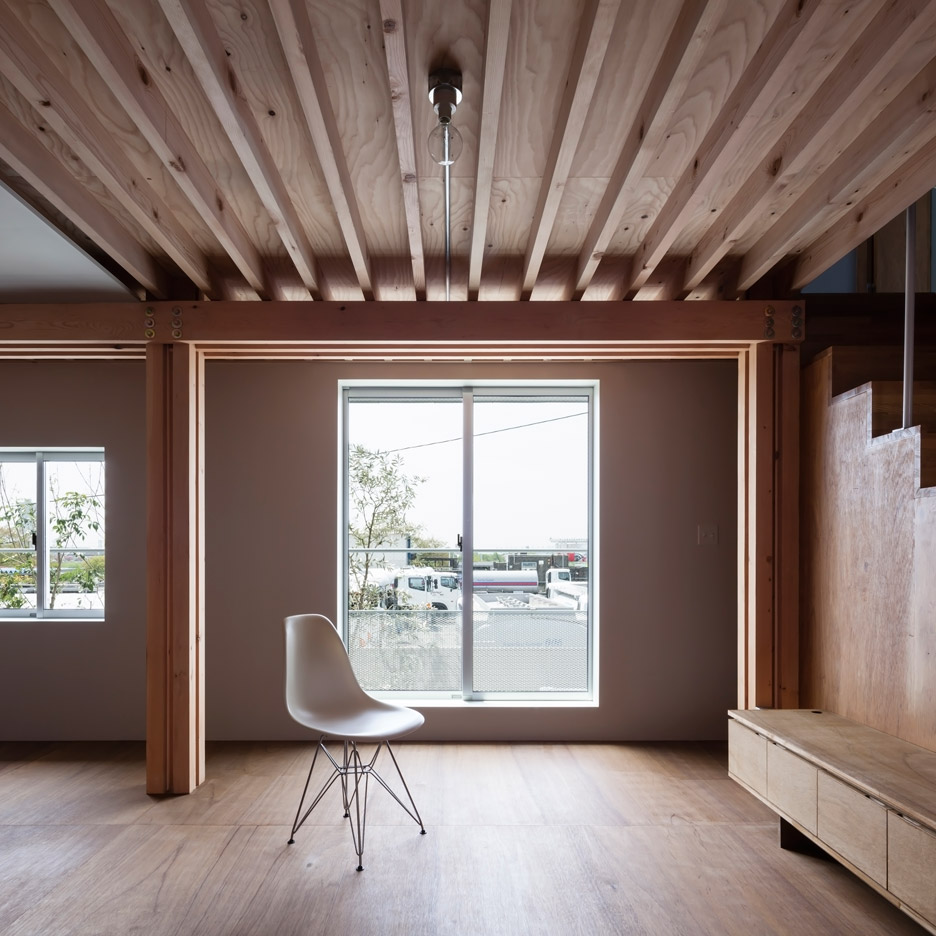 The contrast between the blocks is emphasised by a wooden fence that divides the site into two plots. A landscaped garden featuring grassy mounds and a snaking pathway provides the setting for the open living room, while the other side is paved to create a driveway.

"Each building is completely different by nature, but they connect to each other gently," said the architects.

"We didn't put two different hopes in one space because it could well vanish each one's nature," they added. "But we separated off two spaces daringly and took advantage of each to make attractive spaces."

Both blocks have mono-pitched roofs, but these slope in different directions.

Almost all of the windows from the two-storey block face towards the garden, while the living space has a glazed facade that slides open, as well as rear windows that run along the top and bottom of the wall.

The house's main entrance is located on the north side of the building. Inside, a kitchen and dining space is on the left, and a master bedroom and bathroom are on the right.

A pointed doorway marks the threshold of the living space, and a wooden staircase leads up to the children's room and guest bedroom on the floor above.

Mizumoto and Kuga founded their Shiga-based studio in 2012. Other completed projects by the pair include a residence with house-shaped doorways and a black house with a timber-lined balcony.

Photography is by Yuta Yamada.