Architecture office NBBJ has unveiled a concept for a series of natural ice rinks on London's River Thames that emerge from below the water's surface.

Named Frost Flowers, the circular ice rinks are envisioned as foldaway structures that close up during the summer but blossom open like flowers during the colder winter months.

Each retractable jetty would drop down below the river's surface to collect water. This would then be lifted back up and frozen, creating a smooth plane of ice that could be used as a skating rink.

According to NBBJ, the project references London's historic frost fairs, which were held between the 17th and early 19th century, when the River Thames intermittently froze over for as long as two months at a time. 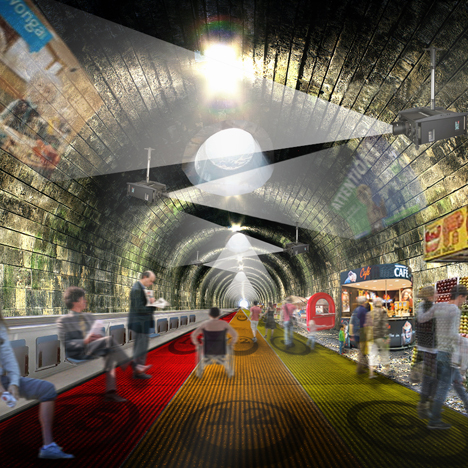 The last recorded fair took place in 1814 and lasted four days. But in 1831 the old London Bridge was demolished and replaced with another that allows the tide to flow more freely, making it less possible for the river the freeze over.

NBBJ believes its ice rinks would be able to recreate the "winter spirit" of these city-wide celebrations, believed to have included food stalls, fairgrounds and sporting events.

"In a dense, modern city such as London, the Thames provides a unique open vista where the history and origins of this great city can be viewed," explained NBBJ design director Christian Coop.

"A draw for Londoners and tourists alike, the South Bank has become a bustling leisure area with bars and markets lining the river," he said. "New space is now desperately needed, and accordingly we looked to our heritage to find one possible solution."

The proposal follows in the footsteps of the Thames Bath project, a proposal for floating swimming pools in the river that also references the city's 17th-century history.

But NBBJ believes the ice rinks could offer even more to the city, as a venue for winter markets and exhibitions.

The firm claims the structures could be easily installed, and could also be adapted to suit different locations along the river, or other cities around the world.

Frost Flowers is the third concept that NBBJ has proposed for London in 2015, following a design for shadow-free skyscrapers and a plan to turn the London Underground's Circle Line tunnel into a 17-mile-long moving walkway. The firm is also working on the orb-shaped Seattle headquarters for Amazon.