Influential US magazine Sight Unseen has launched an LA exhibition of work by local designers in response to the city's resurgence as a centre for design (+ slideshow).

The Site Specific LA exhibition features new furniture and products by a dozen studios in Los Angeles, both established and emerging.

"Thanks to a strong manufacturing base, affordable studio spaces, and an increasingly active community of design talents, Los Angeles has emerged as a key focal point of the American design scene," said Monica Khemsurov, co-founder of New York-based Sight Unseen.

The pieces in the exhibition range from abstract macrame wall art by Tanya Aguiniga to the streamlined Grain chandelier by Brendan Ravenhill, which features a circular shade made of strips of maple.

A number of chairs are on view, including The Professor Chair designed by Only Love Is Real. The walnut piece consist of a triangular frame and a circular slatted back.

Marble tables by Jonathan Zawada are intended to be shipped in flat-packed boxes and can be assembled without the use of tools. The underside of the table is lined with recycled rubber.

A series of architectural ceramic objects by Ben Medansky are also on display, alongside shelving systems for house plants by Eric Trine.

While New York has long been regarded as America's design capital, Los Angeles is starting to rival the Big Apple.

LA has become "the hottest destination" in America for international architects

The California metropolis has a rich design heritage, particularly in regards to Mid-Century Modernism. Young designers are now building on that heritage, creating pieces that often have a casual and crafted aesthetic.

In September, leading architecture firms told Dezeen that LA has already become "the hottest destination" in America for international architects.

Austere, a gallery and store conceived as "a magazine you can walk into", is one of a number of companies that have opened in the city in recent years to satisfy a growing market for contemporary design.

"Austere, with its commitment to showcasing design talent in downtown LA, is the perfect venue for us to spotlight some of the best studios working in the city now," said Khemsurov.

The LA branch of the gallery, which also has a venue in New York, initially focused on Scandinavian design when it first opened in May 2014. This is the first time it has staged an exhibition of work by LA studios.

"Based in Downtown Los Angeles, the heart of the city's burgeoning creative community, Austere is about honouring great design and great designers," said Fredrik Carlström, the store founder.

"Sight Unseen is the preeminent forum for discovering new design talent, and we could not imagine a better curatorial voice for our first-ever exhibition of LA design," said Carlström.

"Created to be a space where ideas flourish, innovations are seen, and collaborations and conversations are started, Austere has invited companies that sit on the leading edge of design, fashion, beauty, hospitality, technology and entertainment to present themselves to the world," said the company, which also runs an outpost in an East Hampton hotel in New York.

Site Specific LA opened on 5 December and runs until 14 February 2016.

In addition to the exhibition, a retail installation by Mast Brothers, a high-end Brooklyn chocolatier, is currently on view at Austere. 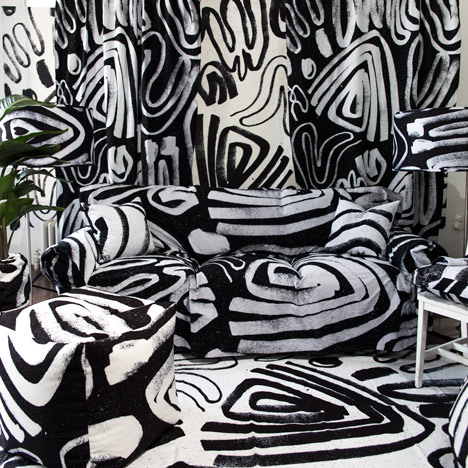 Print All Over Me debuts homeware line with patterned installation

The minimalist "shop within a shop" features a series of brown display boxes topped with chocolate bars from the company's 2016 collection. The confections are all for sale.

Mast Brothers has also collaborated with Austere on the creation of a limited-edition chocolate bar, called Toasted Milk.

Mast Brothers was started in 2007. It has a flagship store in Brooklyn, which it recently renovated, along with one in London. It plans to open a location in the Los Angeles Arts District in 2016.

More about architecture and design in Los Angeles