The installation – named Ice – is the first instalment of a year-long collaboration between Dixon and Caesarstone, and was unveiled at the Interior Design Show in Toronto this week.

The design is influenced by the jagged pieces left over when Canada's frozen lakes are cleared by icebreakers during the winter.

To reflect this, Dixon, best known for designs including cog-like light fixtures  and brass tea sets, developed a series of triangular-shaped prisms in different sizes and heights. These form serving stations, surfaces and stools. 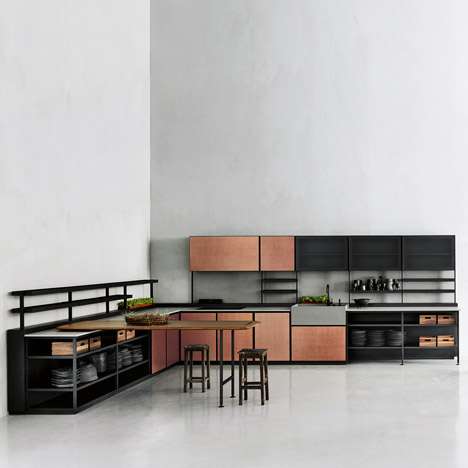 "In our Toronto show we propose a food preparation and consumption space, which draws on the analogy of the kitchen as an alchemist's laboratory where raw materials are transformed into treasure through the elemental process of freezing, melting, shaving and cooking with ice," said Dixon.

"Where the contemporary kitchen seeks to hide the activities behind a series of minimal blocks, here we expose the chopping, the steaming, the freezing, the scouring and the disposal of waste in all its active glory," he added.

The Ice kitchen is the first of four kitchens themed around the elements of Ice, Fire, Earth and Air. The concept also celebrates local foods from four chosen cities. The next design will be based on Milan, and will be unveiled in April during the city's design week.

The final two designs will be revealed later in the year in North America and Asia.

"Each year we explore a new design concept that displays different elements of Caesarstone, be it new colours and textures, or inherent surface characteristics such as strength and durability," said Eli Feiglin of Caesarstone.

"This year we are pushing the limits of experimentation with the material, collaborating with design innovator Tom Dixon," he added. "His work is extremely inventive, fresh and thought-provoking; and we feel it brings a fascinating new angle to the creativity typical of Caesarstone's kitchens."

Caesarstone previously collaborated with Philippe Malouin to create a swing set installed inside a Neoclassical palazzo in Milan. The London designer also used the material to create a range of geometric planters in a variety of shapes, textures and colours.

Other exhibits at the Interior Design Show in Toronto included a showcase of work by 10 emerging Canadian designers.

Photography is by Vicky Lam.